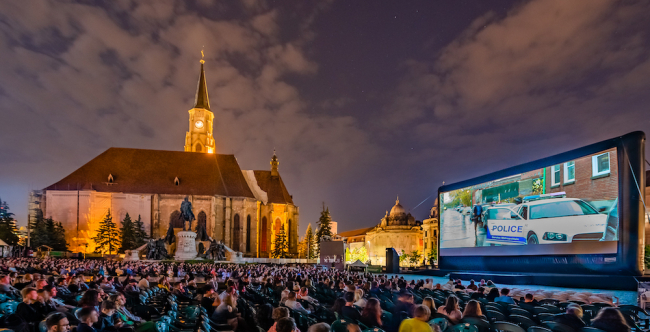 Founded in 2002, in the town of Cluj-Napoca, Transilvania IFF has grown rapidly to become the most important film-related event in Romania and one of the most spectacular annual events in the region. It is supported by the Creative Europe - MEDIA Programme and in 2011, Transilvania IFF was accredited by the FIAPF, which places it among the 40 most important festivals in the world.

Transilvania IFF’s main goal is the promotion of cinematic art by presenting some of the most innovative and spectacular films of the moment that feature both originality and independence of expression, that reflect unusual cinematic language forms or focus on current trends in youth culture. Dedicated to 1st and 2nd time directors, the Official Competition focuses on discovering new voices.

The Transilvania IFF experience means an exciting and intriguing selection, picturesque locations such as castles or open air museums, cine-concerts in churches, educational platforms for young audiences, solid industry programs, and a consistent focus on the future of audio-visual content.
Personalities
Over the years, Transilvania IFF’s Lifetime Achievement Award has been presented to important figures of European and worldwide cinema, including Nicolas Cage, Alain Delon, Sophia Loren, Fanny Ardant, Nastassja Kinski, Jiří Menzel, Debra Winger, Claude Lelouch, Geraldine Chaplin, Wim Wenders, Marin Karmitz, Jacqueline Bisset, Michael York, Catherine Deneuve, Claudia Cardinale, Annie Girardot, Udo Kier, Vanessa Redgrave, Nicolas Roeg and Franco Nero.
TIFF Industry
After years of continuous work in promoting Romanian cinema and welcoming international guests to meet national productions and their filmmakers, in 2015, the festival rounded up its industry activities under one umbrella. TIFF Industry is open for talents from the region through Transilvania Pitch Stop (TPS) - a tailor made workshop for feature fiction films wrapping up with a public presentation and one to one meetings, and Transilvania Talent Lab (TTL) - the hands-on programme dedicated to emerging talents. TIFF Industry hosts a series of masterclasses, lining-up experts in audience development and script writing, and organizes closed screenings for industry members and special screenings of the newest Romanian films, in the presence of filmmakers.
Previously, the festival hosted the launch of the new platform #FEEDback (Film Eastern Europe Dialogue, 2015), regional editions of The Pitch, in partnership with ShortsTV, and LIM (Less Is More), the European platform for project development of limited budget feature films created by Le Groupe Ouest.

The festival also developed a strong educational platform for children, through EducaTIFF (awarded Best Educational Project in Romania, at Education Awards Gala, 2011 edition), and teenagers, through Let's Go Digital! The intensive workshop gives teenagers the opportunity to cover all the steps of filmmaking under the supervision of film professionals and using modern equipment.

Unlimited.tiff.ro, launched in 2019, is the first streaming service (SVoD) launched by a film festival in Romania and the only product of its kind in Central and Eastern Europe. The platform gives access to acclaimed auteur driven productions, arthouse gems, genre films.
InfiniTIFF
The festival has initiated a platform for new forms of audio-visual storytelling that connects cinema lovers and artists with cutting edge development in virtual reality and interactive cinema.

Transilvania IFF was the first major film festival to take place physically in Europe, during the pandemic, in the summer of 2020.

Sophia Loren, Lifetime Achievement Award 2016 recipient: “As an actress, it's easy to get excited, but this time I'm overly excited.”

Richard Peña, professor at Columbia University and former director of the New York Film Festival: “I am for the first time at TIFF. It's lovely and very friendly, the audience is very enthusiastic, and the cinemas are packed. One can sense the support of the Cluj people for the festival and for the Romanian cinema.”

Iain Smith, Mad Max producer, Lifetime Achievement Award 2016 recipient: “It's a great honor to receive this recognition at TIFF. I feel privileged and Romania helds a special place in my heart because here I shot Cold Mountain, a great movie that changed the course of things for Romania. I made foreigners understand that they can make movies here.”

Bill Guentzler, artistic director of the Cleveland IFF and jury member in 2016: “It was amazing. Most festivals cannot do something like that.”

Bardi Johansson, musician: “I had amazing time in my new favourite city, Cluj. All the people were so nice, the festival gets 10/10!.”

Michael Kutza, director and founder of Chicago IFF: “I’m in charge of a very large festival in Chicago, but I’m still impressed with the TIFF selection. I’m very impressed with everything I see, the type of films, and the various genres. I’m jealous. But I have better weather than you guys. I’ve seen wonderful films, I’ve discovered a city of film aficionados, and this is awesome. I’m thinking of coming back to shoot a film – this city begs to be shot on film”.

Nik Powell, producer: “I think that TIFF, Mihai Chirilov and Tudor Giurgiu, together with their whole team, have one of the best film selections in the whole world. Here, I was introduced to the largest number of films offering an interesting perspective on life”.

Dennis Lim, director of programming Film Society of Lincoln Center: “Romanian cinema has been very important for the past 10 years or so, thus I think such a festival is absolutely necessary. It's very important to have a national competition and an actual promotion of the Romanian film industry. Transilvania IFF is a wonderful festival”.

Jay Weissberg, film critic Variety: “Balancing the intellectual with the emotional is the ultimate form of cinephilia, something so well reflected in TIFF’s programming, weaving together drama, comedy, horror, documentary…. It’s what feeds our hunger for film, and hopefully keeps our minds open to new experiences and discoveries.”