infiniTIFF 2019 - Virtual production and the future of audiovisual content 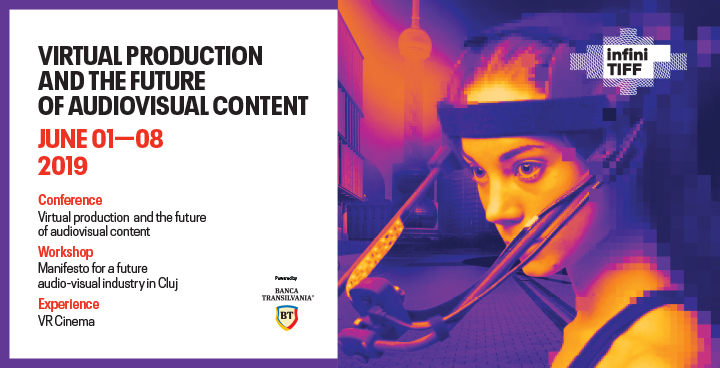 The 2019 edition of infiniTIFF payd tribute to the digital transformation and the social and technological disruption we are currently witnessing, which require a profound rethinking of our concepts regarding work, housing, mobility, communication, and, last but not least, entertainment.

Last year, infiniTIFF shifted from an audience-oriented experience hub to an output-oriented think tank for professional stakeholders. infiniTIFF was dedicated to the exploration of the most important trend in current filmmaking: virtual production. Virtual production blends traditional filmmaking techniques with cutting-edge technology and involves professionals in real-time collaboration. It has gained so much ground in recent years that it is no longer exclusively used by film studios and major productions, but has been adopted by independent and low-budget film productions as well.

Last year' s infiniTIFF program includes the infiniTIFF Summit, a half-day conference focusing on virtual production, as well as the collaborative infiniTIFF Workshop with interdisciplinary participants from different industries and backgrounds. In addition, the crowd-pleasing VR Cinema will present a diverse program of experiences.

The shift from audience hub to B2B think tank was intended to incentivize new business activity in virtual production at the intersection of film, game design, animation, and audiovisual technology in Cluj-Napoca. As such, infiniTIFF 2019 was a key event in the broader project Cluj Future of Work

The infiniTIFF Workshop seeked to delve in-depth into the wants and needs of key interdisciplinary stakeholders in the context of virtual production. The half-day event brought together forward-thinking entrepreneurs, policy makers, movers and shakers from arts, culture, as well as the academic world in Cluj-Napoca in order to inspire them to seek new forms of collaboration across disciplines. The workshop was moderated by innovation experts.

The infiniTIFF Summit provided an opportunity for knowledge exchange and interdisciplinary networking. This half-day conference explored how work, workflows and processes in filmmaking are currently being disrupted and reinvented by virtual production. Virtual production enables filmmakers to combine footage from real-world environments, live actors, motion capture, computer-generated imagery (CGI), real-time effects, immersive technologies, and games engines in new and exciting ways. The formerly linear order of pre-production, production, post-production now dissolves into a continuous process which allows stakeholders in the filmmaking process to collaborate with a groundbreaking level of flexibility, control, and creativity, across all levels of budget.

The infiniTIFF VR Cinema presented a groundbreaking and wide-ranging selection of VR content, including both new works and modern classics.