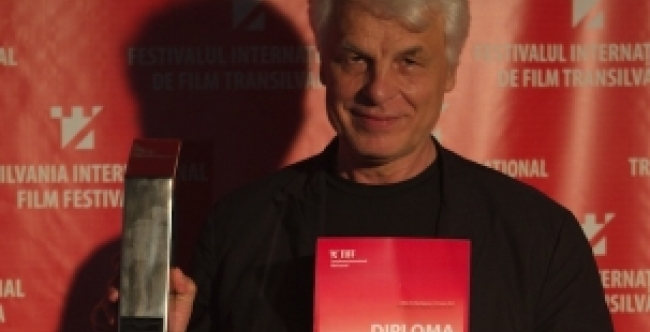 Saturday, June 4, at Ursus Open Air, brought Italian actor and director Michele Placido, recipient of the Lifetime Achievement Award offered to an outstanding personality of the European cinema presented by actress Monica Bîrlădeanu in front of the 1,000 viewers present in Unirii Square to see the most recent production signed by the famous filmmaker: the feature Vallanzasca – Angels of Evil, premiered at Venice Film Festival 2010 and starring the well-known Romanian actress.

During the touching ceremony hosted by Mihai Chirilov, the Artistic Director of the festival, who mentioned the extensive career of the Italian guest so well beloved by the Romanian public for his memorable role in the TV series The Octopus / La Piovra, Placido thanked the organizers for presenting him with the award. The filmmaker appeared on stage holding issue no. 2 of AperiTIFF, the official festival daily, which featured the line „Welcome, commissary Cattani!” on the first page. I’m happy and honored to be here, in Cluj, at the tenth edition of the festival. This newspaper, AperiTIFF, was the first thing I saw when I landed, and I have to say that, looking at the cover photo, I’ve realized that even if I’ve grown old, I’m still a hansome man. I was happy to find Monica Bîrlădeanu’s name in the main article, whom I want to thank for introducing me to the New Romanian Wave and its representatives. Michele Placido told the TIFF audience that Monica Bîrlădeanu will star in his next feature, an Italian-Romanian co-production on the subject of migration of Italians to Germany in the 1960s, which will be shot in Novermber, in Romania: this way, the Italian people still have a chance to realize what emigration means.

Placido also thanked the organizers for selecting Vallanzasca in the festival line-up: Vallanzasca is a film that many people in Italy have boycotted, because it shows that Italy doesn’t mean only The Pope, Berlusconi, Michelangelo and art, mentioning it’s the filmmakers’ duty to tell the story of their country, and that the impressive portrait of the feared mobster Renato Vallanzasca proves that has the freedom to recount anything.

Given a sustained round of applause by the audience in Cluj, the recent winner of the TIFF Lifetime Achievement Award offered to an outstanding personality of the European cinema will have an informal meeting with the press and public on Sunday, June 5, at 12.30, in the TIFF Lounge pavilion in Unirii Square.