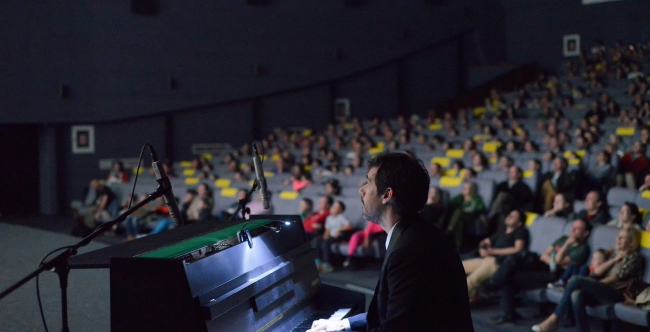 Charlie Chaplin, Stan & Bran and Buster Keaton will come back to life at the „Florin Piersic” cinema via an unique experience: Cinepiano, a show by artist Tony Berchmans.

Coming all the way from Brazil, the composer/pianist recreates the magic of the turn-of-the-century cinema when the moving image was accompanied live by music, sounds and noises. The 1929 comedy Big Business starring Stan & Bran, the touching and amusing A Dog’s Life (1918), staring Charlie Chaplin and the classic Cops (1922), starring Buster Keaton, will be thus accompanied by sighs, laughs, noises and song created live on the piano.

Tony Berchmans's music combines classic and folk music with personal compositions drawing on ragtime and jazz. From 2009, the musician has accompanied live silent films in various museums and cinemas. He is a musical producer, author of books about film music and curator of the first edition of the International Film Music Conference (2007), which took place in Rio de Janeiro. The show, dedicated to the whole family, features in the EducaTIFF program