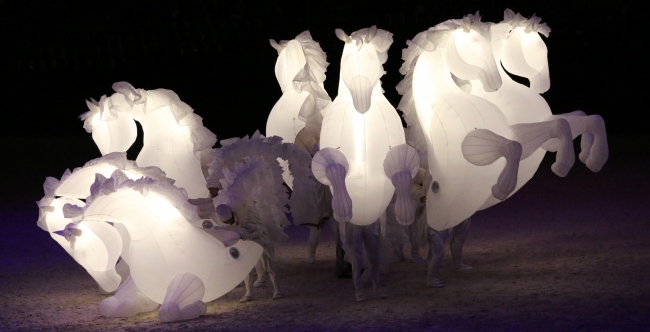 After being one of the highlights of the 2011 edition of Transilvania IFF, in Piața Unirii Open Air in Cluj, Compagnie des Quidams returns with a new, visually and musically unique show: "FierS à Cheval". Audiences can preview the show through a fragment presented during the official opening of the festival, on Friday, May 29th, starting from 8:45pm in Unirii Square, while the complete show can be enjoyed at Bonțida, during the first night of Weekend at the Castle. Described as an exciting street show, this new performance promises to be a poetic invitation for the imagination.

According to the artists, "of all the animals close to humans, the horse is certainly one that has most nurtured dreams, fantasies and games of the imagination; creature of fascinations, the horse is part of our lives, carrying us in the most magical legends; it accompanies the heroes and gods as mere mortals". Horses, in a completely unique appearance, are the main characters of this special performance.

The show will be followed by the Romanian premiere of one of the most anticipated documentaries of the year - Kurt Cobain: Montage of Heck, directed by Brett Morgan - the first film about the famous leader of the band Nirvana made with the cooperation of his family.