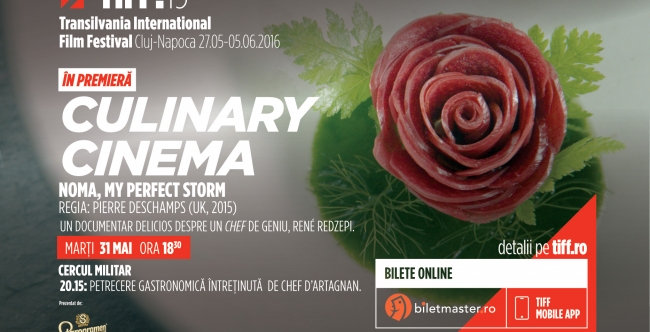 Culinary Cinema, a new type of TIFF event, is created around a film dedicated to the genius of famous Chef René Redzepi and his famous restaurant in Copenhagen, Noma. My Perfect Storm(dir. Pierre Deschamps) will be screened at Cercul Militar on Tuesday, May 31, from 6:30, and will be followed by a gourmet party with Chef D'Artagnan at Colin's Gastro Pub.

The documentary follows the behind the scenes story of the famous Copenhagen restaurant Noma, voted four times the best restaurant in the world and winner of two Michelin stars. Behind the success of Noma there is René Redzepi's revolutionary mind – a cook of modest Macedonian origin, who managed to change not only the destiny of the restaurant after the 2013 scandal, but also the face of modern Nordic cuisine.

Cuisine inspired by nature, the seasons and the Nordic culture, as well as the exclusive use of local ingredients, grown by a network of local farmers, brought Noma the title of best restaurant in the world in 2010, 2011, 2012 and 2014.

The event is presented by Staropramen.