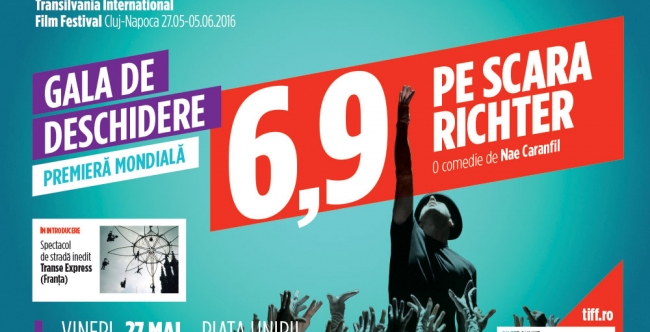 6.9 on the Richter Scale, Nae Caranfil's latest film, will have its world premiere during the opening gala of the 15th edition of the Transilvania International Film Festival (May 27-June 5). The author of Romanian box-office hits such as Filantropica and The Rest is Silence returns with his seventh feature film, a burlesque comedy with musical elements about midlife crisis, love, depression, and an obsessive fear of earthquakes.

6.9 on the Richter Scale will be screened in the Unirii Square on Friday, May 27, at 9:45 PM, in the presence of Nae Caranfil.

The opening gala will precede the screening from 8:30 PM and will include a memorable performance by the famous French band Transe Express. Street art pioneers, the dancers, acrobats, and musicians of Transe Express have already performed in 80 countries.  They opened, among other things, the 1992 Olympics Games in Albertville and the 2009 Ski World Championships in Val d'Isere.

Gala tickets are 30 lei and can be acquired from www.biletmaster.ro.