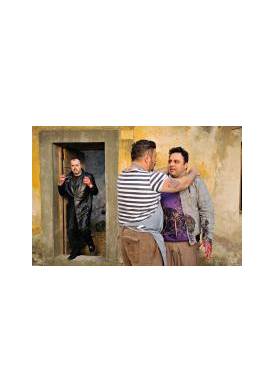 Turning transgression into a comedic principle, this turbulent farce that toys with clichés and stereotypes turned out to be an unexpected hit in Serbia. In The Parade a life-saving operation on a gangster’s pitbull terrier brings together two very different worlds: old school machismo meets gay obsession for interior design, as a number of former foes find themselves obliged to form a tenuous bond with a bunch of gay activists. This motley crew are sent on an impossible and probably suicidal mission to protect a fresh attempt to hold a Gay Pride parade from renewed and certain onslaught from nationalists and neo-Nazi organisations and make the event a success.