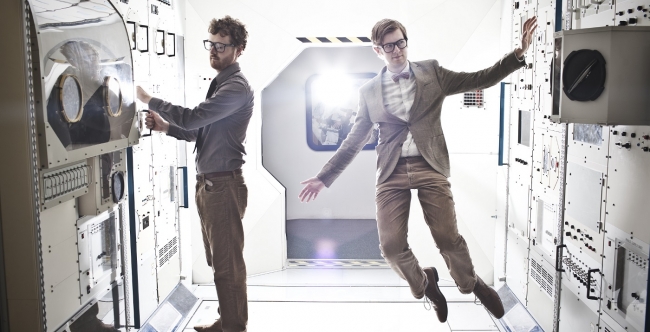 The British band Public Service Broadcasting and their dazzling show mixing archive images, cine-concerts based on films with Buster Keaton and animations from the 30`s-50`s, concerts in churches – the Transilvania International Film Festival – taking place June 2-11, 2017, offers a dynamic selection of music in addition to that of films. Tickets can be bought in advance, in the following weeks, on www.biletmaster.ro, and directly on the TIFF 2017 app, available in App Store and Google Store.

Two years after Tabu, Christine Ott returns to Cluj for a special event scheduled one day before the TIFF opening, on June 1, starting at 12.00 (for children) and 19.00, at The Student House: her cine-concert Lotte, mon amour. Seduced by the unique charm of the animated masterpieces of Lotte Reiniger (1899-1981), one of the pioneers of silhouette animation, Christine Ott composed original music rendering the magic of these stories. The French artist, who has performed alongside Radiohead, Yann Tiersen or Noir Désir, will be accompanied by Anne-Irène Kempf (alto and percussion). Tickets, here.

“You`ll never need another band, ever”, the Esquire wrote about the multi-instrumental London-based duo Public Service Broadcasting coming to Transilvania IFF with a concert that is not to be missed. A fascinating blend of indie, electronica and pop infusions with audio samples from public archive footage and propaganda material, their music will be accompanied by a mesmerising visual show. US and USSR archive images from the 1957-1972 space race period will serve as visual background. The concept was launched together with The Space Race album (2015), excellently received by critics, and which earned the band sold out concerts. The concert will take place on Saturday, June 3, at 19.00, at The Student House. Tickets, here.

One of Buster Keaton`s masterpieces, the silent film The General (1926), will be accompanied at Transilvania IFF by the original music of the French trio Diallèle. Established in 2008 by Romain Bercé and brothers Sylvain and Mathieu Lemaire (guitar, saxophone, drums), the trio proposes a rock-fuelled engaging Western, in which the amazing stunts of Buster Keaton Keaton hold you breathless. The General/ Le Mécano du général was ranked one of the best 50 films of all times by the Sight & Sound magazine. The cine-concert is scheduled to take place on Monday, June 5, at 20.00, at The Student House. Tickets, here.

Special events at Transilvania IFF will also include concerts in several churches in Cluj. On June 6,  Jozef van Wissem, Dutch musician and composer living in New York, frequent collaborator of Jim Jarmusch, will perform songs composed for the original score of the Only Lovers Left Alive film, which earned him the Cannes Soundtrack Award 2016. Van Wissem is “equally an avant-garde composer and a baroque lute musician, and therefore nothing short of contradictions”, writes The New York Times. He has held over 800 solo lute concerts all over the world, has recorded or sung live with Jarmusch, Tilda Swinton or Zola Jesus, and his hypnotic and poetic music has propelled him in line with some of the most valuable contemporary musicians. Tickets, here.

On June 8, Charlie Cunningham, one of the aspiring voices of British folk music, will be delighting the audience with songs from his latest album, Lines. His music is a mixture of folk sensitivities with pop and flamenco, inspired by the Spanish culture after his two years spent in Seville. Following three successful hit singles which brought him the title of “Bloggers Choice for 2014” of Radio 1 (BBC), Cunningham launched his first album this year, Lines, which the Clash publication described as a “outsanding debut”. “A small gem of British folk”, writes the Rolling Stone. Tickets, here.

Tickets can be bought in advance, in the following weeks, on www.biletmaster.ro, and directly on the TIFF 2017 app, available in App Store and Google Store.