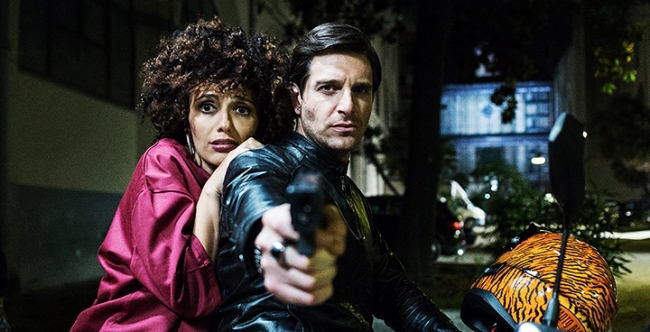 Film lovers can start working on their must-see lists for TIFF 2018. The 17th edition of the Transilvania International Film Festival comes back to Cluj between May 25 and June 3. The first ten films confirmed for next year come from Venice and San Sebastian.

Venice Silver Lion winner Foxtrot by Samuel Maoz, director of Lebanon (2009 Venice Golden Lion winner) and 2010 TIFF jury member. In his latest film, he combines edgy drama with back comedy touching on the absurd in a fable on destiny told through the story of an Israeli family who loses their child to conflict. Lior Ashkernazi, “an actor capable of conveying raging tempests of feeling with just his eyes” (AVClub) returns in a starring role on TIFF screens after Big Bad Wolves and The Wanderers,

Twice present in the official TIFF competition with Either Way and Paris of the North, Hafsteinn Gunnar Sigurdsson returns to TIFF with Under the Tree, which was screened in Orizzonti Venice and awarded in Zurich and the Hamptons. A tragicomedy revolving around a big beautiful tree presiding over a family yard while shading the precise suntanning spot of the next door neighbors, it chronicles a war that, once declared, escalates with no bounds.

Love and Bullets / Ammore et malavita is an original musical on the Mafia signed by the Maretti brothers and presented in the official competition in Venice. Located in Naples dangerously hacked by rival bands, the film follows the offing of a Mafia boss whose only witness is the long-lost but never forgotten love of the killer.

There is music also in Nico, 1988, written and directed by Susanna Nicchiarelli, which is much more than a biopic on Andy Warhol muse and Velvet Undeground member Christa Päffgen, Winner of the Orizzonti section in Venice, the film “acts not only as a portrait of a complex figure, but recognizes the considerable toll of daring not to conform” (Screendaily). The high priestess of darkness is masterfully interpreted by Danish actress Trine Dyrholm, joined on screen by Anamaria Marinca.

The shock of Caniba, another Orizzonti selection which received the special jury prize, comes from Lucien Castaing-Taylor and Verena Paravel of Leviathan fame. The documentary explores with extraordinary courage the life of Issei Sagawa, a Japanese cannibal, in a “frequently uncomfortable but always fascinating work” (Hollywood Reporter).

People's Choice Award winner in Venice Days / Giornate degli Autori (GDA), but also in Jerusalem International Film Festival, Savi Gabizon’s black comedy Longing is the story of an improbable wedding and of a man learning to be a father after discovering the death of a son he never knew he had.

Candelaria, winner of Director’s Award in Venice Days / Giornate degli Autori (GDA), from director Jhonny Hendrix Hinestroza, puts a camera in the hands of a septuagenarian couple living in an economically strapped Cuba. The two reignite their passion looking at each other through the new lens, but their game becomes perilous when their films end up in the hands of nefarious dealers.

From San Sebastian comes Life and Nothing More, winner of the FIPRESCI prize, lensed by Barbu Bălășoiu (Sieranevada, Charleston). This is the second film from António Méndez Esparza (Aqui y allá), who decides to work only with non-actors to anatomize an impoverished community in Northern Florida through the eyes of 17 year-old Andrew, a car thief awaiting his first trial.

“A fantastic, allegorical and profoundly poetic film” (El Mundo), Giant / Handia by Jon Garano and Jose Mari Goenaga was awarded the jury prize in San Sebastian for the 19th century story of the tallest man in the world and of fame, a force capable of tearing apart even the most bonded families.

Argentinian director Diego Lerman’s A Sort of Family is also about the fragility of families. Winner of the grand jury prize in Chicago and of best screenplay in San Sebastian, the film features Bárbara Lennie (Magical Girl) in the lead role.

New titles and sections will be announced in the coming weeks. Submissions are still open until February 1, 2018. Competition guidelines are available at http://tiff.ro/en/film-submission-guidelines-TIFF-2018.
Share on FacebookTweet