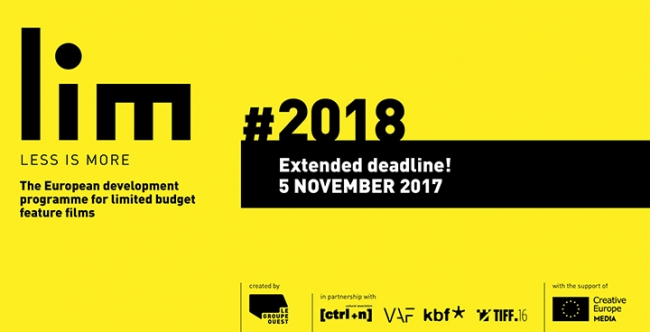 If you’re writing your first, second or third feature, LIM is for you.

If you’re ready to accept working within a limited budget in exchange for greater creative freedom, LIM is for you.
If you believe that brainstorming with script consultants and other filmmakers from all around the world, on top of a mountain in Transylvania or in a remote fishing village on Brittany’s coast can strengthen your screenplay, LIM is for you.

LIM offers a new generation of filmmakers, already acknowledged for their short films or first features, the opportunity of designing their own route into limited budget feature film production. The scheme is also open to artists coming from theatre, documentary and visual arts.

Pierre Hodgson, script consultant in LIM: « One of the things we try to do at LIM is to make sure that the projects are as close as possible to each filmmaker and we impose, and the system imposes on them as little as possible. At the same time, it is our job to ensure that scripts come out of LIM as narratively efficient as possible in order that they preserve their unique quality in the face of a founding system. That is important because it means that the films will stay as different as possible and keep on surprising audiences. »

Antoine Le Bos, LIM’s Artistic Director : « Through limitations you dig vertically into a story. Limitation is a tool that focuses a project on what is most essential. That is character, plot, location, style. Without constraints, it is often hard to concentrate on what matters most and find your form. »

LIM’s first year involved 16 projects from 15 countries and proved the incredible added value of combining forces to maximize narrative power in the service of creative freedom.

LIM consists of 3 workshops in 3 different European countries between March and October 2018. In the intervals regular deadlines and online sessions insure a process of regular exchange and follow-up over the 9 months period.

More details on the application process for the next edition of LIM – Less is More can be found here:

Keep track on all LIM’s news and developments: