01.06.2016 11:31
Actress and top model Madalina Ghenea is one of the special guests of the Transylvania International Film Festival. 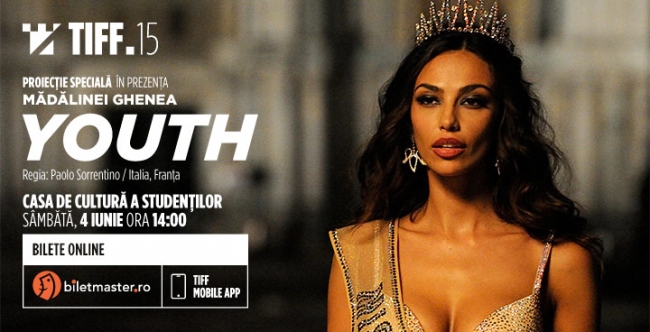 Compared by the Italian press to Sophia Loren, Madalina Ghenea will meet the famous actress during the Closing Gala on June 4, at the National Theatre, where she will present the latter with the Lifetime Achievement Award. The star will also attend a special screening of Youth, by Paolo Sorrentino, on Saturday, June 4, from 14.00, at the Students' Culture House. In the film, Madalina Ghenea stars alongside Michael Caine, Harvey Keitel, Jane Fonda and Rachel Weisz. Tickets can be purchased in advance from www.biletmaster.ro.

Since her first appearances on the big screen, the Italian press wrote about the beautiful Romanian actress and top model in that she has "the Mediterranean charm of Sophia Loren". Like the great Italian actress, Madalina began her career as a model at the age of 15. She then appeared in commercials for famous brands, and soon received offers of roles in international productions. In 2011, she debuted as an actress in the Italian comedy I Soliti Idioti (r. Enrico Lando) and then starred in hit productions such as Dom Hemingway (2013), alongside Jude Law, Youth (2015), opposite Michael Caine and Harvey Keitel or Zoolander 2 (2016), with Ben Stiller and Owen Wilson.

Madalina Ghenea, who plays Miss Universe, made a splash last year on the red carpet in Cannes, where Youth competed for the Palme d'Or. It is the second film in which the multi-award-winning Italian director of Il Divo and La grande bellezza worked with English speaking actors after This Must Be the Place (with Sean Penn): Michael Caine, Harvey Keitel, Rachel Weisz, Jane Fonda and Paul Dano. Youth won the Best European Film, Best Director and Best Actor (Michael Caine) awards at the European Film Academy Awards and was nominated for an Oscar for Best Original Song.

Michael Caine plays a retired conductor who meditates on the difficulties of being old, while spending a holiday in a luxury resort in Switzerland, together with a good friend of his, played Harvey Keitel.