11.04.2018 16:37
Concert premieres, screenings accompanied by live musical scores, ciné-concerts in churches, and illustrious guests will be presented in Cluj-Napoca at the 17th Transilvania International Film Festival. 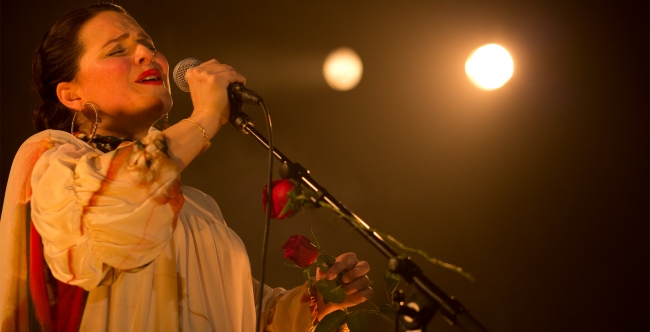 Tickets for most events have already gone on sale at; https://tiff.eventbook.ro/

The famous Icelandic artist is among the favorite voices for Belgium’s The Colorist Orchestra. Their collaboration resulted in an album described by The Guardian “a vibrant, colourful collection of classical and contemporary collisions.”

Emilianei Torrini’s striking voice if often compared to Björk’s, and can be heard on the soundtrack of The Lord of the Rings (2002, dir. Peter Jackson), Men, Women & Children (2014, dir. Jason Reitman), or Tenderness (2009, dir. John Polson).  Her music is recast by the eight members of The Colorist Orchestra in entirely novel forms. Their mesmerizing sound is the result of an incredible combination of unusual musical objects as well as classical instruments used in unconventional ways. The fantastic sets, consisting of constantly evolving wood installation, turn the show into a memorable audio-visual experience.

Fred C. Newmeyer and Sam Taylor’s silent romantic comedy famously features the iconic image of Harold Lloyd perilously hanging from the hands of a clock on a tower high above the street—a stunt Lloyd performed himself despite having lost two fingers in a prior production accident. Almost one century after its premiere, Safety Last! (1923) endures as one of the most celebrated silent film. The TIFF audience will get to experience the film with live accompaniment by pianist and organist Samuel Liégeon (France), an artist whose improvisations brought him acclaim in Europe and the US, as well the 1st prize at the prestigious Boëllmann-Gigout international competition in Strasburg in 2008. Since then, he has been featured in international improvisation competitions in Leipzig, Harlem, Münster, and Chartres.

Ciné-concert: The Phantom of the Opera with live accompaniment by Samuel Liégeon

Samuel Liégeon’s brilliant improvisations will also accompany the screening of one of the best-known silent horror films, The Phantom of the Opera (1924). Rupert Julian’s classic  adaptation of Gaston Leroux ’s eponymous novel about a series of horrible crimes committed in the name of love by an enigmatic figure living in the bowels of the Paris Opera will be presented for the first time at TIFF with a live musical performance.

Ciné-concert: Right in the Eye (special screening for June 1st)

Starting from the work of Georges Méliès, Right in the Eye / En plein dans l’œil re-creates the poetic, surreal work of the cinema pioneer and technical wizard. The spectacular musical score of Jean-Francois Alcoléa, played live by Alcoléa & Cie, offer the public the chance to rediscover the early days of cinema and animation. The youngest filmgoers will be charmed by the fantastic imagery and characters, as well as by the playful and daring sound and light effects.

Georges Méliès is known for his special effects, early time-lapses, multiple exposures, and hand-coloring of film stock. The audio-visual show presented at TIFF tells the story of the first steps into in the world of cinema, inspired by the creative heritage handed down by Méliès, and enhanced by special orchestrations. The special screening of films such as Le voyage à travers l’impossible (1904) and Le voyage de Gulliver a Lilliput et chez les Géants (1902) will be accompanied by light effects and an innovative set design, and a live score that combines solemn classical music with pop and underground rhythms, in a mixture that  is sure to mesmerize audiences young and old.

Suported by: the Ministry of Culture and National Identity, the National Center of Cinematography, Cluj Local Council and City Hall, the Romanian Cultural Institute, Cluj County Council, the Creative Europe - MEDIA Program of the European Union