04.05.2018 19:25
An exclusive presentation of the first clips from Moromeții 2, set against the rhythms of a Teleorman taraf, the launch of the first documentary on a Romanian band, and the return of one of Ukraine’s most spectacular groups at TIFF. 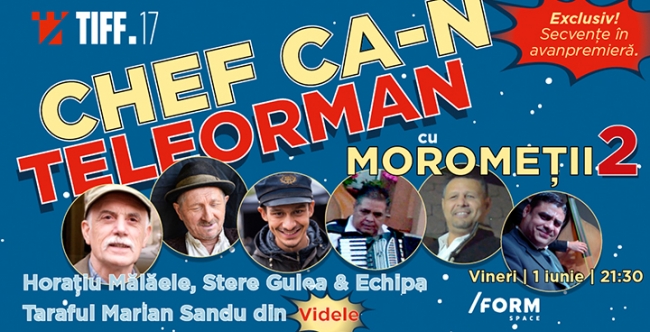 Teleorman Country Fair is a special evening presenting the first images from the highly anticipated Moromeții 2, in the presence of lead actor Horațiu Mălăele, who took up the iconic role of Ilie Moromete as directed, 30 years after the first instalment, by Stere Gulea. The screening is a warm-up to the festival’s most vibrant party, which will be headlined by the Marian Sandu Taraf from Videle and locals from the Talpa village, where the original film, as well as its sequel, were set. They will host this special evening at Form Space on Friday, June 1st, starting at 9:30 PM.

Vunk – Our Naked Truth is the first documentary about a Romanian band, and TIFF is certainly the perfect place to premiere it. Following the history of the one of the most popular bands in recent decades, the documentary will surprise Vunk fans with unexplored stories, including the band’s participation in the 1988 national Communist art contest and the 1990s incarnation of the band under the name of Vank. Cornel Ilie and his band mates will come to Form Space on Monday, May 28, at 9 PM, screening for the film being followed by a live performance.

After their first visit to Cluj in 2013, DakhaBrakha return to TIFF after a five-year period of spectacularly ascending notoriety and concerts in all four corners of the world, including Glastonbury and Bonnaroo. Their deep repertory allows them to constantly surprise audiences with their cult “etno-chaos” sound drawing on traditional Ukrainian folklore. Their concert will be held at the Students’ Culture House on Monday, May 28, at 7:30 PM.

Trans Duna is a performance by Hungarian artist Lőrinc Barabás, who proposes travelling 3,000 kilometres along the Danube from Regensburg to the Black Sea, accompanied by a live trumpet mix. The concert will conclude the Hungarian Day at Urania Palace on Wednesday, May 30, at 9:30 PM.

Tickets for all events are available on tiff.eventbook.ro