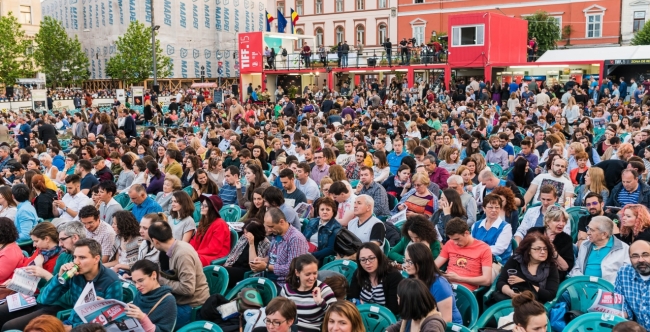 The anniversary edition of the largest film festival in Romania ended spectacularly on June 5, marking a new record in its 15 years of existence:  the 248 films from 64 countries have brought more than 79,000 ticket holders in cinemas, with 9% more than last year. It is the second year with a significant increase in the number of tickets sold at TIFF, 25% of which were purchased online. The total number of participants exceeds the figure of 120,000: in addition to the ticket holders, there were people present at the free outdoor screenings, master classes, workshops, launches, exhibitions or meetings at TIFF Lounge. 1,100 guests – directors, producers, actors, industry professionals and Romanian and foreign journalists – also attended the screenings and special events taking place in 20 locations.

The 15th edition of Transilvania International Film Festival had numerous sold out screenings and events, including the Romanian premieres Sieranevada, by Cristi Puiu, Two Lottery Tickets by Paul Negoescu, and Dogs, by Bogdan Mirică, the Transylvania Trophy winner who received two additional screenings on June 5, both sold-out in a very short time. Tickets were also sold out in advance for the world premiere of Nae Caranfil's, 6.9 on the Richter scale, which opened the festival in the Unirii Square, in the presence of about 3,000 spectators, for the special screening in honor of Sophia Loren with Marriage Italian Style, for the concert with The Passion of Joan of Arc – which received an additional screening, also sold-out, for the concert with Haxan from Weekend at the Castle program and for closing gala of 4 June.

Another record was the number of visits to the official website of the festival, www.tiff.ro, constantly updated before and during the festival. In the 10 days of Transilvania IFF, there were 55.280 unique visitors, 106.946 visits and 745.138 page views, 15% more than in 2015. Romania, Germany, UK, USA, France, Hungary, Italy, Spain, Poland were among the countries which generated the most users. The official blog, blog.tiff.ro, had over 27,000 views during the festival. The Mobile app TIFF 2016, developed by Greppy Systems, was accessed 190.000 times – four times more than during the last edition – by 4.300 active users. The new option of buying tickets through the app has been used 7.300 times.

Millions of users have watched the videos and posts on our Facebook page TransilvaniaIFF. All videos posted for this edition had a total of 1.014.746 views. The five spots of the image campaign gathered 614.639 views with an organic reach of 2.064.000, the most popular being Taxi Driver aka The Taxidermist, watched 193.481 times. The fans of the page gave 210,000 likes to the posts during the festival – an increase of 500% compared to last year – the most popular being the story of Sophia Loren's arrival in Cluj. The daily videos had an average daily reach of 43.123.

This year, about 350 volunteers in 33 departments helped organize events in various Transilvania IFF locations. Some came specifically to Transilvania IFF from Oradea, Bacau, Bucharest and Tulcea. The oldest volunteer was 37 years and was one of the 55 volunteers nominated for the title of „Volunteer of the Year at TIFF”. Nine of them will have the opportunity to work at TIFF's partner festivals.

Transilvania IFF guests said they were impressed with the selection, the audience and the festival atmosphere. "As an actress, it's easy to get excited, but this time I'm overly excited," said Sophia Loren during the Lifetime Achievement Award ceremony, delighted by the warm welcome she received. "I am for the first time at TIFF. It's lovely and very friendly, the audience is very enthusiastic, and the cinemas are packed. One can sense the support of the Cluj people for the festival and for the Romanian cinema", said Richard Peña, professor at Columbia University and former director of the New York Film Festival.

"It's a great honor to receive this recognition at TIFF. I feel privileged and Romania holds a special place in my heart because here I shot Cold Mountain, a great movie that changed the course of things for Romania. I made foreigners understand that they can make movies here", said the producer of Mad Max, Iain Smith. "It's very cool. Not that I got the award, but that they thought of me. That is tremendously exciting", said Cristi Puiu, who received a surprise award at the end of TIFF – the Transylvania Trophy 15.

Wieland Speck, main curator of the Berlinale Panorama section and member of the Competition jury, was for the first time in Cluj. "Although I know Romania well enough on the big screen, I wanted to see it for myself. And, of course, to visit my wonderful colleagues who organize this festival, people I admire because they are a very successful". Another extremely impressed guest was Bill Guentzler, artistic director of the Cleveland IFF and jury member.

Referring to the cultural impact of TIFF on Cluj, the Minister of Culture, Corina Şuteu, told the daily newspaper AperiTIFF: "Culture is an asset, an investment whose returns are not measured only in pragmatic terms. Do not forget that the study about the impact of TIFF was done 14 years in the festival. It's only now that we know in what we invested, because now we can determine a major economic impact. The culture should be aware that, as in education or health, investment must be long term."