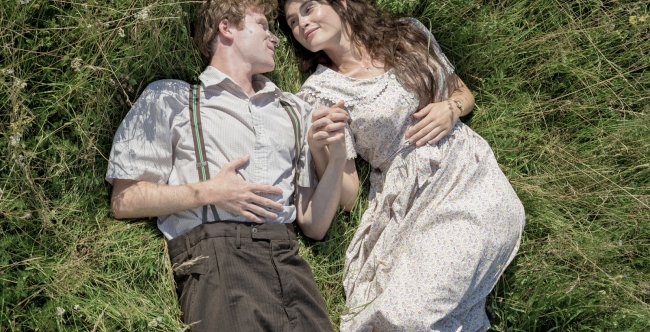 The History of Love (Povestea iubirii), director Radu Mihăileanu’s first English-language feature, will have its Romanian premiere at the 16th edition of the Transilvania IFF (June 2-11). Director Mihăileanu and British actor Derek Jacobi will present in Cluj for two screenings: the giant outdoor screen projection in Unirii Square on June 5th, and a screening in the village of Dâncu, the actual location where part of the film was shot. Starting with June 9th, Transilvania Film will be distributing The History of Love in cinemas in Romania starting.

Tickets for the Unirii Square screening are available from biletmaster.ro and the TIFF 2017 application. The special screening in Dâncu is free of charge.

Based on Nicole’s Krauss’s bestseller of the same title, which has been translated in over 35 languages, the film follows the love story of Leo and Alma, two young Polish Jews yanked apart by the horrors of the Second World War. In the film, The History of Love is the title of the book Leo Gursky (Derek Jacobi) writes for Alma Mereminski (Gemma Arterton). Mysteriously published years after the life paths of the two parted, the book connects characters across time and space.

“When I first read Nicole Krauss’s novel, I had the feeling that I know all the characters, that they have been with me, inside me, all this time. The feeling was so strong that I began to wonder how she managed to enter my mind without ever having met me and with, indeed, much more talent than I myself possess. The story encompasses all the themes I myself adore: the power of love, its capacity to cut across eras, continents, generations, wars, cultures, and also humor — whose living proof is our all being here, alive, today,” says Mihăileanu.

A special guest at Transilvania IFF this year, Sir Derek Jacobi is one of the most resounding names in British theater and film. An actor and a director himself, Jacobi played over 90 roles in cinema and television productions, including The Day of the Jackal (1973), Little Dorrit (1983), Dead Again (1991), Gladiator (2000), Gosford Park (2001), The Riddle (2007), and The King's Speech (2010). He was twice awarded the prestigious Laurence Olivier distinction for his stage roles in Cyrano de Bergerac (1983) and Twelfth Night (2009), and a Tony award for Much Ado About Nothing (1984).  He is a founding member of the National Theater Company in London.

Another star featured in Mihăileanu’s film is Gemma Arterton, former “Bond girl’ (Quantum of Solace, 2008), protagonist of blockbusters such as Clash of the Titans (2010), Prince of Persia: The Sands of Time (2010) and Byzantium (2013), and recipient of important theater honors. Alongside her are cast Sophie Nélisse (The Book Thief) and the well-known American actor Elliott Gould (M*A*S*H, the Ocean’s trilogy, and the Friends television sit-com), as well as Romanian actors orneliu Ulici, Mihai Călin, Miriam Rizea, Simona Maican, Claudiu Maier and Ovidiu Cuncea.

The History of Love is a French-Canadian-Belgian-Romanian co-production. Libra Film is the Romanian co-producer. It was shot in Cluj and in Bucharest, as well as in Montreal and in New York. Key scenes were shot in the village of Dâncu, which is part of the Aghireșu township in the county of Cluj, and in several locations in the city of Cluj: the synagogue on Horea Street, the National Theater, the Central Park, and the Chemistry College.

Director and writer Radu Mihăileanu was born in 1958 in Bucharest and left for France in the 1980s. He directed multiple-award-winning films including Trahir (1993); Train de vie (1998), which received the FIPRESCI Prize in Venice and the audience award at Sundance; Va, vis et deviens! (2005), Audience Award winner in the Panorama section of the Berlinale and Best Original Screenplay winner at the César awards; Le Concert (2009), also shot in Romania, nominated for a Golden Globe for Best Foreign Language Film, recognized at the César awards for Best Sound and Best Music Written for a Film, and awarded four Gopo trophies in Romania; and La source des femmes, which was included in the 2011 Cannes competition.