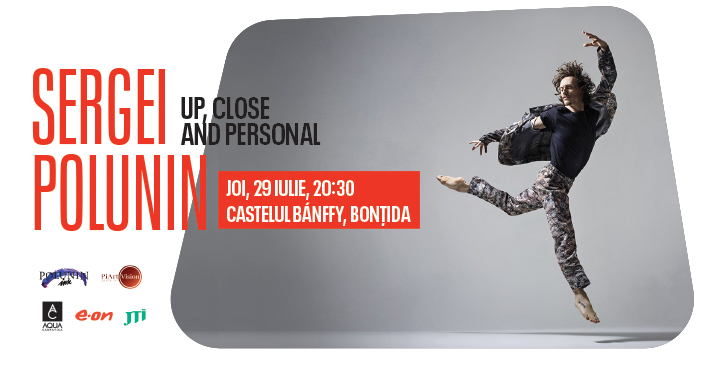 International star Sergei Polunin, widely considered as the most talented dancer of his generation, makes his first Romanian appearance as a special guest of the 20th edition of the Transilvania International Film Festival (July 23-August 1). Fans will get the chance to see him on Thursday, July 29, at 8:30 PM at the Bánffy Castle in Bonțida, in the special event Sergei Polunin Up, Close and Personal. The day before, July 28, at 7 PM, at the Students Culture House in Cluj, the dancer will meet with the audience of Dancer, the moving documentary on Polunin’s eventful life, directed by Steven Cantor.

Tickets for both events are on sale at tiff.eventbook.ro. Polunin will also lead a masterclass at Transilvania IFF —  details to be announced soon.

Born in 1989 in the Ukraine, Sergei Polunin became the youngest lead dancer in the history of London Royal Ballet at only 19 years of age. Appreciated for his artistic genius, his phenomenal technique, and his hypnotic stage presence, Polunin danced at the Bolshoi and the Stanislavsky Theaters, the Scala and the Paris Operas, and is currently a permanent guest of the Bavarian State Ballet in Munich. He also travels the world with shows produced by Polunin Ink, the dance company he founded. In 2019, he lead Romeo and Juliet with Alina Cojocaru. His most popular turn to date is David LaChapelle’s video for Hozier’s song “Take Me to Church,” which gathered over 29 million views on YouTube.

In recent years, Polunin also worked in films like Murder on the Orient Express (directed by Kenneth Branagh), Red Sparrow (directed by Francis Lawrence), The White Crow (directed by Ralph Fiennes), and Simple Passion (by Danielle Arbid). Known as the “bad boy of ballet” on account of his rebellious style, his impulsive departures from renowned companies (including his first, from the London Royal Ballet, at only 21), and his controversial statements, Polunin is the subject of a revealing documentary by Steven Cantor, Dancer, which will be shown at Transilvania IFF on Wednesday, July 28, at 7 PM, at the Students Culture House in Cluj before a Q&A with its star subject. A sequel titled Dancer 2 is currently in production, it will be directed by Anton Corbijn and is expected to be released in 2022.

Sergei Polunin Up, Close and Personal, scheduled for Thursday, July 29, at 8:30 PM at the Bánffy Castle in Bonțida, will start with the screening of Bolero, which gives new dimensions to Ravel’s masterpiece by amplifying the dancer’s movements with visual effects signed by Teun van der Zalm. Ross Freddie Ray signs the concept and the choreography. The evening will continue with Sacré, based on Igor Stravinsky’s Rites of Spring and inspired by Vaslav Nijinski’s original vision, and choreographed by Japanese artist Yuka Oishi. The constant struggle between emotion and reason, the central theme of this world-famous show, plays out to reveal multiple layers of Polunin’s artistic personality. The event will conclude with a Q&A with the star about his spectacular and unusual journey.

IMPORTANT: According to current regulations, for the July 29 event at Bánffy Castle in Bonțida, only persons who are 10 days out from the last dose of the SARS-CoV-2 vaccine or have a negative RT-PCR test taken within 72 hours of the event or a certified rapid antigen test no older than 24 hours can be admitted. They will need to produce proof of vaccination or evidence of a negative test on paper or on the phone, as well as an ID.

Tickets and passes for the 20th edition of Transilvania IFF are on sale at tiff.eventbook.ro.

Event organized with the support of Aqua Carpatica, E.ON, JTI.

Supported by: The National Center for Cinema, the Cluj City Hall and the Cluj Local Council

Movies any time and anywhere in Romania on TIFF Unlimited: unlimited.tiff.ro.