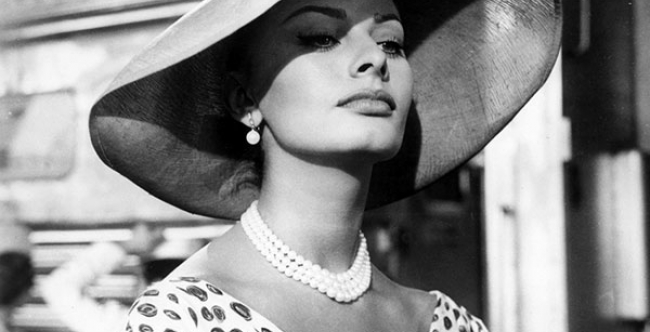 A living legend of cinema and one of the most intensely celebrated beauties of the world, Sophia Loren comes for the first time ever to Romania, as a special guest of the Transilvania International Film Festival. Sophia Loren will receive the Lifetime Achievement Award at the closing gala of the 15th edition, on June 4, at the National Theatre in Cluj. On June 3, at 18:30, at the Students' Culture House, the actress will attend a special screening in her honor of Marriage Italian Style (1964).

Tickets can be found here.

“It’s one of the meetings that we badly wanted for many years at TIFF and I’m glad it’s finally happening. Sophia Loren is the idol of many generations, a very tonic and charmed presence, with a huge popularity everywhere in the world. It’s an honor to have her at TIFF and a moment of happiness for Cluj to meet her, at her first arrival in Romania. She’s one of the series of personalities who were celebrated at Transilvania IFF, from Claudia Cardinale, Annie Girardot, Vanessa Redgrave, to Catherine Deneuve and Geraldine Chaplin”, said Tudor Giurgiu, the festival president.

Sophia Loren's participation in the festival is made possible by the collaboration between TIFF and The Business Women's Association (BWA) Cluj, co-organizer of the event. "We are honored to support the presence in Cluj of one of the most talented, powerful and popular women in the world of film. Sophia Loren is a model for many generations of women and meeting her at TIFF will be a very special event," said Mihaela Rus, president of the Cluj Association of Business Women

At 81, the Italian diva went on a tour in the US, meeting with the public in a special event called An Evening with Sophia Loren. The actress has evoked her fabulous life and career, starting from the childhood in Naples – Sofia Villani Scicolone was born on September 20, 1934 –, through the postwar years, when she was seen in beauty contests when she only 14 years old, the first roles in Vittorio de Sica's films, the director who discovered her, followed by Hollywood, her meetings with the great actors of those times, awards, love, family. And fame. All these are to be found in her memoirs, published in 2014 - "Yesterday, Today, Tomorrow: My Life."

In the six decades she was involved with cinema, Sophia Loren starred in around 100 films, working closely with great directors, from Vittorio de Sica, George Cukor, Charlie Chaplin, Mario Monicelli and Ettore Scola, to Robert Altman. She began her career in 1950, at the age of 15, and her first major role was in De Sica's The Gold of Naples (1954). Too Bad She’s So Bad (1954) was the first film alongside Marcello Mastroianni, the actor who was to become her constant partner on the big screen. Among their collaborations, there are Marriage Italyan Style (1964), for which she was nominated for an Oscar, the comedy The Priest’s Wife (1970) and Yesterday, Today, Tomorrow, which boasts a striptease scene that made history.

In fact, Sophia Loren has always enthralled her film partners. Among them, Cary Grant, Peter Sellers, Clark Gable, Frank Sinatra, Gregory Peck, Jack Lemmon, Paul Newman, Marlon Brando. The moment that propelled her among the great movie stars of the world was 1958, when she signed a contract with Paramount Studios in Hollywood. In 1961, the dramatic role of the mother in La Ciociara (1961), directed by Vittorio de Sica, brought her 22 international awards, including one in Cannes and an Oscar, thus becoming the first actress winning the acting statuette for a foreign film and the first Italian actress awarded this trophy. At the height of her career, she was paid $ 1 million to play in The Fall of the Roman Empire (1964). The last film in her long collaboration with Vittorio de Sica was The Voyage (1974), in which she starred with Richard Burton. Her latest appearance is in a short film, Human Voice (2014), directed by one of her two sons, Edoardo Ponti.

Sophia Loren is the recipient of four Golden Globes for World Film Favorite – Female, of the prestigious Cecil B. DeMille Award and of a BAFTA and she holds the record of being awarded six David di Donatello Awards for Best Actress. In 1991, she was celebrated by the American Film Academy with a Lifetime Achievement award, was declared a "treasure of world cinema" and, in 1999, was recognized by the American Film Institute as one of the great legends of the golden age of Hollywood.