26.05.2018 18:06
The 17th edition of the Transilvania International Film Festival began Friday night with a sold-out screening of the controversial Israeli film Foxtrot. 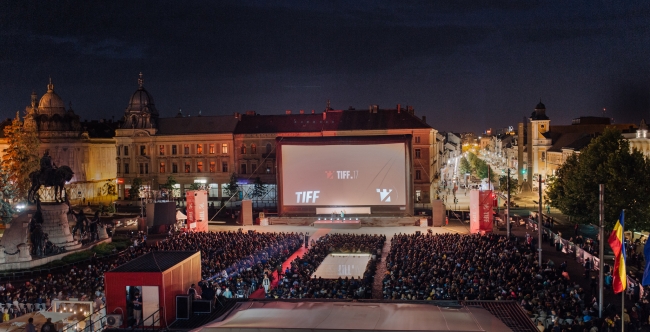 Pouring rain came to a stop right before multi-award-winning director Samuel Maoz’s film was set to have its Romanian premiere on the largest screen in in the country, at the TIFF 2018 Opening Gala, before an audience of 3,000.

TIFF President Tudor Giurgiu opened the evening with a speech highlighting the growth of the festival over the past years, confirmed by Cluj-Napoca Mayor Emil Boc, who went on saying: “TIFF may have started as a Cluj brand but I think we all agree that by now Cluj has become a brand of the Transilvania International Film Festival.”

“The 2018 TIFF edition begins under the signs of cinematic excellence, provocation, but also nostalgia and melancholia,” said TIFF Artistic Director Mihai Chirilov, who invited film lovers to rediscover the great auteur Ingmar Bergman in the #Bergman100 retrospective, but also to  discover the 10 films that go against the grain in the To Be or Not to Be Politically Correct? section.

Two great Romanian personalities were honored on the opening of the festival: Chirilov dedicated this edition to the memory of the great director Lucian Pintilie, and the short Păpușa / The Doll was screened to commemorate the passing of Doina Cornea, one of the most outspoken dissidents during the Communist regime. Marius Dumitru Șopterean’s film on the fight led by this symbol of courage and resistance was projected on the largest screen in Romania on the opening night.

The evening continued with the screening of Foxtrot, the much-anticipated film by Samuel Maoz , who has been known to the TIFF public since 2010, when he presented his debut feature in Cluj. Ms Tamar Samash, Abassador of Israel to Romania, joined the filmmaking team on the red carpet, and Director Samuel Maoz, Israeli star Lior Ashkenazi, and the young actor Yonaton Shiray declared themselves overwhelmed by the atmosphere in Cluj. The festival audience has another chance to meet Samuel Maoz on Sunday at 5 PM, when he will be featured as the first special guest of TIFF Lounge this year.

Following an opening day of sold-out screenings from early morning until late at night, TIFF 2018 continues Saturday and Sunday with Weekend at the Castle. For two days, the Banffy castle in Bonțida will become a playground by day, filled with workshops and interactive games for children, and a staging ground for screenings, events, ciné-concerts, and spectacular parties by night. On Saturday, May 26, almost 500 film lovers are set to attend a screening of Alfred Hitchcock’s first film The Pleasure Garden (1925) with live accompaniment by Notes & Ties. Then, on Sunday, Japanese director Sion Sono will present at the Banffy castle his film Tokyo Vampire Hotel, which was partially shot in Romania, including in Cluj. The screening will be followed by a horror-themed Full Moon Party presented by the Full Moon Festival and Vinyl, Rum, Tapas & Wine.

A space for virtual reality, new forms of storytelling, and cutting-edge cinema, infiniTIFF officially opens on Saturday with a program that includes, among many other things, the opening of the Ingmar Bergman and his legacy in fashion and art exhibition starting at 5 PM at the Art Museum.

Sunday, May 27, will have another exciting series of events: Almudena Carracedo and Robert Bahar’s El silencio de los otros / The Silence of Others, which tells the story of Franco’s victims in Spain, will screen at 3:30 PM at Cinema Florin Piersic. At 7 PM, Radu Preda, the President of the Institute for Investigating the Crimes of Communism and the Memory of Romanian Exile, together with journalist Cristian Tudor Popescu will take part in a debate on the Right to Memory organized by TIFF Lounge in the Unirii Square. At the same time, but at the Students’ Culture House, the silent rom-com Safety Last! (1923) will be screened with live accompaniment by pianist and organist Samuel Liégeon.

Almost 900 guests are expected in Cluj for TIFF 2018. Among them, Hungarian auteur Márta Mészáros, who will be honored with a lifetime achievement, will screen her most recent film Aurora Borealis (2017) at Cinema Florin Piersic on Monday night.