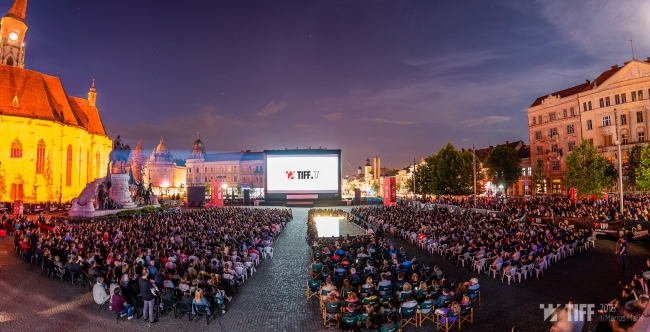 The largest film event in Romania attracted over 135,000 participants this year, with 227 titles—178 features and 49 shorts—that played on the largest screen in Romania and the 13 partner spaces. Almost 95,000 tickets were bought to attend these screenings—a number that is 5.7 per cent higher than last year. Over 1,000 guests from Romania and abroad attended the 10 festival days, and over 50 of the events in the festival were sold out.

Opening film Foxtrot drew over 3,000 audience members for the Unirii Square Open Air screening. Golden Bear-winner Touch Me Not was sold out both at Cinema Victoria and at the Students Culture House. Andrei Crețulescu’s feature debut Charleston also sold out in advance. Fresh from its Cannes premiere, The Man Who Killed Don Quixote, the surprise screening of this edition, had to be screened twice to satisfy film fans at TIFF. Similarly beloved were One Step Behind the Seraphim and The Guilty, which were not only sold out, but also the recipients of audience awards. On the last day of the festivals, TIFF partner cinemas could not accommodate all those who wanted to see the winning films, which had sold out immediately: The Heiresses (winner of the Transylvania Trophy), Winter Brothers (Best Directing Award), as well as The Home and Scythe Hitting Stone (winners of Special Jury Awards).

Among the special events with the highest attendance, the recital of international opera star Angela Gheorghiu and the screening of Tosca stand out, followed by The Pleasure Garden ciné-concert accompanied by  Notes & Ties.

This year’s record holder in terms of sheer number of tickets is Wes Anderson’s most recent film Isle of Dogs, which sold no less than 3,647 tickets. And this year’s fastest-selling tickets were recorded for The Phantom of the Opera ciné-concert at the Holy Trinity Roman-Catholic Church and for the events in the Film Food section—which sold out two days after they went on sale.

A broad selection of this year’s films, including the award-winners, can be seen starting tomorrow, June 6 through June 10, at Cinema Elvire Popescu in Bucharest, during TIFF București, whose schedule is available here.

Approximately 400 volunteers between 16 and 46  years of age took part in making TIFF run smoothly; they were selected from among 700 applicants. In addition to denizens of Cluj and Romanians who came from all over the country, this year’s volunteer team included young people from France, Lithuania, Poland, and the Republic of Moldova. Forty of them were nominated for Volunteer of the Year, five received awards, and four will go on to two partner festivals for TIFF: New Horizons in Poland in 2018 and to Kino Pavasaris in Lithuania in 2019. The work of these volunteers came to complement that of the over 300 members of the festival team.