01.05.2018 10:55
The image campaign for the 17th edition of the Transilvania International Film Festival re-makes the iconic poster for Ingmar Bergman’s masterpiece Persona, but with Romanian stars Maia Morgenstern and Oana Pellea. 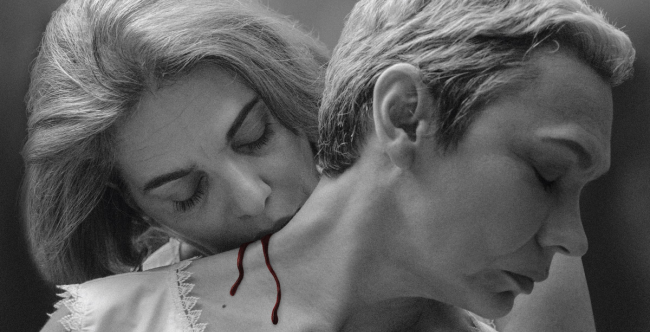 This homage to the legendary Swedish auteur whose centennial is celebrated this year at TIFF with a career-long retrospective, as well as to his best-known masterpiece, dubbed as “the Mount Everest of cinematic analysis” continues the tradition of tongue-in-cheek remakes that TIFF audiences have come to expect.

In the 1966 film, a knife’s edge confrontation takes place between an actress who took refuge in silence (Liv Ullmann) and her nurse (Bibi Andersson). In the 2018 clip, Maia Morgenstern (The Passion of the Christ) and Oana Pellea (Children of men) re-enact one of the key scenes of the film, adding an explicitly Transylvanian twist to the vampire-victim psychological relationship of the two main characters.

“I accepted TIFF’s proposal for three reasons: this is a festival I have admired and supported since its first edition, I adore Ingmar Bergman, and I adore Maia. I was thrilled with the final result of the shoot and I am convinced I was right in taking up this challenge,” said Oana Pellea. “It’s surprising,” added Maia Morgenstern. “For me this is the closing of a circle. It so happens that I came across Persona first in university, when I performed a scene from this great film for an exam—before I actually saw the film. Re-enacting this reference scene with Oana now, with humor, reverence and not a little courage, was an important reminder of our love for cinema and for the craft of acting. This was all the more meaningful as it was related to TIFF, a celebration in which we meet auteurs—both masters of the genre and fresh faces—on our home turf.”

The official TIFF trailer to be launched on the festival Facebook page features the two beloved Romanian actresses together on screen for the first time, as directed by brothers Anton and Damian Groves of Studioset—who are in their fifth year directing the visual campaign for Romania’s most important film festival.

The trailer was produced by Adriana Răcășan and Libra Film with Andrei Oană as director of photography, and the shoot took place at Studio 82, with equipment from Ana Light&Grip and Cutare Film. Cosmin Bumbuț is the author of the poster photograph and Andrei Pastuhov, TIFF’s art director, signs the graphics. Nicole Cârnu did the costumes, Natalia Clima did make-up, and Sebastian Serghe did hair. The trailer was edited by Bogdan Orcula, the music is signed by Ștefan Crișan, and the post-production was supervised by Călin Bogdacenco.