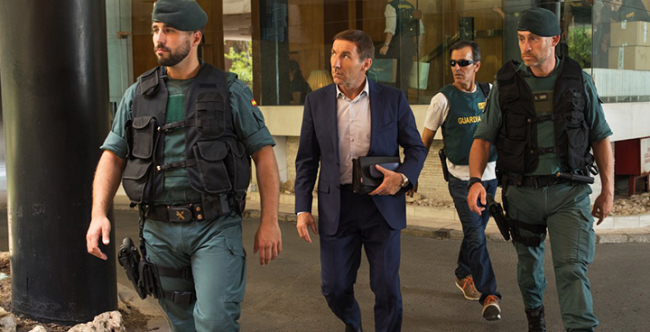 The news year brings good tidings for cinephiles: the first titles confirmed for the program, all launched in major fall festivals, will have their Romania premiere in Cluj-Napoca this spring.

Two of the directors previously awarded at TIFF will return with their most recent films: Spanish filmmaker Rodrigo Sorogoyen, whose Stockholm won of the 2014 Transilvania Trophy, will bring  The Realm (San Sebastian, Toronto), an absorbing political thriller about corruption at all levels of power that may as well have been inspired by Romanian realities. The film has just been nominated for a record 13 Goya Awards. Then Uruguayan Federico Veiroj, winner of the Special Jury Prize at TIFF for his 2011 La vida util, brings to TIFF Belmonte (San Sebastian, Toronto), a moving portrait of a freshly divorced painter seeking a balance between his successful career and his personal dependency on his 10-year-old daughter.

A different look at painting is provided by My Masterpiece (Veneția), a new black comedy by Gaston Duprat, whose The Distinguished Citizen was presented last year in TIFF. Accused by his gallerist of failing to promote his own work, painter Renzo Nervi vandalizes one of his paintings by shooting bullets into it. The intended act of self-vandalism is embraced as performance art, triggering a delicious farce about the business of art.

A decade after winning an Oscar for The Lives of Others, Florian Henckel von Donnersmarck returns to the race with Never Look Away, which was presented in competition in Venice and has been freshly nominated for best foreign language film at the Golden Globes. Inspired by the life of Gerhard Richter, the director cuts across four decades of German history, from the Nazi regime to the Communist one in East Berlin, in an engrossing epic about the phantoms of the Holocaust and art in a totalitarian regime.

Rojo, Benjamin Naishtat’s third feature, is a tragicomedy set in a small Argentinian town. A banal evening in a bar where a lawyer is verbally attacked by a stranger turns into a complex story filled with secrets, silences, and crimes. The San Sebastian festival jury, which included Romanian director Constantin Popescu, awarded no less than three prizes to this film: for direction, acting, and cinematography. Another San Sebastian selection arriving in TIFF is Quien te Cantara, the firm that confirms the status of Carlos Vermut (Magical Girl) as rightful successor of Pedro Almodovar. This dark melodrama, reminiscent of Ingmar Bergman’s Persona, centers on a star of the ‘90s preparing her comeback after a decade of absence. But as she loses her memory in an accident, she needs to relearn to sing with the help of a fan who impersonates her idol in karaoke shows.

As all the other films by Matias Bize (The Life of Fish, The Memory of Water) were presented in prior years at TIFF, 7:20 Once a Week could not be an exception. A chance meeting forces Manuel and Julia to reconsider their marriages and wish for more as a one-night stand stretches out into more. Olivier Assayas’s Parisian comedy Doubles Vies (Veneția, Toronto) also deals with double lives. Unexpected references to Star Wars, Taylor Swift, and Theodor Adorno are brilliantly woven into the story of a successful editor who has to adapt to the digital era, in which books no longer physically exist, couples are a flexible concept, and life seems to re-mold itself around social media with each new day.

British director Peter Strickland (Katalin Varga) reurned this year to major festvals with the stylized horror In Fabric (Toronto, San Sebastian), which gives new cinematic meaning to the term “a dress to die for.” An ode to the transformative powers of fashion and a scathing critique of consumerism, the film brings back to TIFF a Strickland regular, the Cluj-born actress Fatma Mohamed.