28.05.2016 13:25
The 15th edition of Transilvania International Film Festival was officially opened on Friday evening, to an overcrowded Unirii Square Open Air and with the world premiere of the latest film directed by Nae Caranfil, 6.9 on the Richter scale. 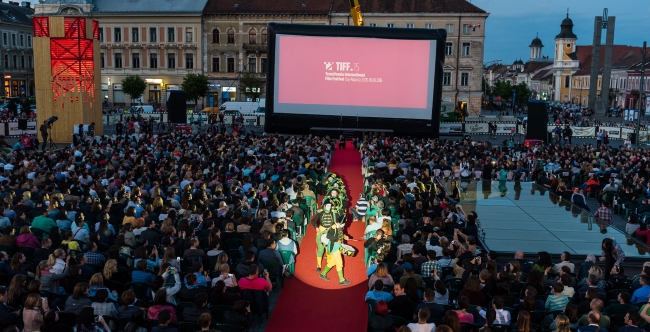 About 3,000 spectators watched the gala presented by the Festival President, Tudor Giurgiu, followed by the spectacular show with the drummers and the aerobatics of the French troupe Transe Express, and Caranfil's delicious comedy. A new Transe Express show, this time with pyrotechnics, is scheduled for Banffy Castle in Bonţida, on May 28, from 20.30.

The gala was attended by Emil Boc, the Mayor of Cluj-Napoca, Andreea Esca, Cornel Ilie, Dumitru Prunariu, the first Romanian astronaut, to whom TIFF dedicates, on Saturday, May 28, a special screening celebrating the 35th anniversary of the his first flight in space, the team of 6.9 on the Richter scale – the director, Nae Caranfil, and the actors Laurentiu Bănescu, Miruna Bilei, Maria Obretin –, Icelandic artist Bardi Johansson, and actor Manolo Cruz.

The stars of the evening were the five protagonists of the TIFF.15 image campaign, who arrived at the gala costumed as the characters they played: Forest Chump (Rares Brănescu and Dolores Bădulescu), Amalia (Andrea Cadar), Terminated (George Iftime), Mariska (Andra Buicu) and Taxidermist (Radu Beres). They took pictures with the TIFF guests and talked about the experience of being an actor for a day.

The Artistic Director of TIFF, Mihai Chirilov, thanked Nae Caranfil for the honor of presenting his most recent film in premiere at TIFF, and said that "the only earthquake in Cluj will be caused by the laughter of the audience". The director will meet with the public on Saturday, May 28, at 17.00 at TIFF Lounge in Unirii Square in a discussion moderated by Mihnea Maruta. Mihai Chirilov also offered some brief advice concerning the schedule – Martin Scorsese's cult film Taxi Driver in a restored copy and the national premiere of Cristi Puiu's Sieranevada.

Tudor Giurgiu showed a moving video about how the city and the festival changed in 15 years, thus introducing the #TIFFMoments campaign, which takes place on Instagram. During the festival, the photos uploaded to Instagram with the hashtag #TIFFMoments will be played on the interactive screens installed in the Unirii Square and other Cluj locations. They can also be watched live on moments.tiff.ro, a virtual album with memories of TIFF 2016. Another 15 years of TIFF event was the presence on stage of Barbu Şofron, son of the Cluj journalist Demostene Şofron, and protagonist of a photo from the TIFF archive, photo taken when he was just 12 years old. Tudor Giurgiu announced, among other things, that they've already sold 400 tickets for the special screening in honor of Sophia Loren, Matrimonio all'italiana, which will take place in the presence of the actress, on Friday, June 3, at 18:30, at the Students Culture House.

During the gala, the audience found out which are some of the locations and special events of this edition – Gilău Castle, Somes Open Air, Urania Palace, Weekend at the Castle, the film concerts at the Students Culture House and the surprises from Casa TIFF.