Transilvania IFF Opens Royally with “King of the Belgians”

28.04.2017 10:47
The successful indie film duo Duo-ul (Altiplano, The Fifth Season) returns to Cluj with a Balkan-flavored story that scored with both critics and audiences. 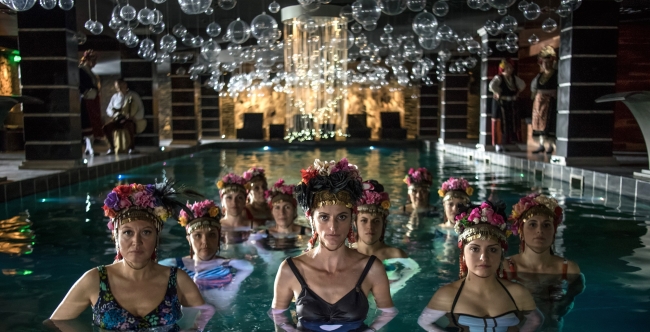 King of the Belgians, the comedy written and directed by Peter Brosens and Jessica Woodworth,  will screen in the official opening of the 16th edition of the Transilvania International Film Festival in Cluj’s Unirii Square on Friday, June 2nd, starting at 8:45pm.

Tickets for the opening gala screening cost 30 RON and are available from biletmaster.ro and the TIFF 2017 App.

The film’s picturesque characters will come up on the TIFF stage, including the Black Sea Sirens choir from the film, lead by Bulgarian pop star Nina Nikolina, who will perform in concert. The fictional group is made up of singers selected from very real famous choirs such as 1990 Grammy winner The Mystery of the Bulgarian Voices, the Philip Koutev Ensemble, Slavey Quartet and Cosmic Voices from Bulgaria.

“King of the Belgians is a delightful, surprisingly respectful ribbing of the incongruity of monarchy, Belgium, and the Balkans,” writes Variety. The film premiered with sold out screenings in Venice and traveled to Busan, Valladolid, Sao Paolo, Hamburg, and Thessaloniki. During a state visit to Turkey, the king of Belgium finds out that his country split into two in his absence. He decides to return, but a solar storm disrupts communications and brings air traffic to a halt. With the help of a British director and of a Bulgarian women’s choir, he sneaks out in drag and stars the road trip of a lifetime through the Balkans.

The closing night of the 16th edition of Transilvania IFF will be equally spectacular. Que Dios Nos Perdone / May God Save Us (BUY TICKETS HERE) will close the festival on Sunday, June 11. In this thriller directed by Rodrigo Sorogoyen (winner of the Transilvania Trophy for Stockholm), two Madrid policemen realize that they are in no way above the criminal they are pursuing, against the background of feverish preparations for a papal visit. “A magnificent film,” notes El Pais about this production, which was nominated for six Goya awards and recognized for Best Screenplay in San Sebastian. The film will be distributed in Romania by Transilvania Film.

In addition to this screening and the earlier-announced The History of Love by Radu Mihăileanu, which will officially launch on June 5th, there will be another much-anticipated open-air screening in Unirii Square: David Lynch’s Twin Peaks: Fire Walk with Me, in a special 25th anniversary digital restoration prepared to coincide with the new season of his revolutionary television series.

The Unirii Square will also host the Romanian premiere of one of the most anticipated French films of the year: Lisa Azuelos’s Dalida, distributed by Independența Film, tells the story of Egyptian-born singer who received over 70 gold records and was the first to receive a both a platinum and a diamond record. A biopic dedicated to one of the ten most popular singers of all time, Dalida is an emotional homage to a singular 1950s diva.

For action film fans, Transilvania IFF offers this year a production that has already enjoyed resounding audience success: Kim Jee-woon’s The Age of Shadows, South Korea’s proposal for  the foreign film category at the Oscars, is a sensational thriller based on a real story from the turn of the 20th century, when Korea was under Japanese occupation.  And fans of Indian cinema will reunite this year with S. S. Rajamouli’s fantasy characters in Baahubali 2: The Conclusion, the sequel to his earlier box-office success.

Finally, Paolo Virzì’s La pazza gioia / Like Crazy comes straight from its special screening in Cannes. The film follows the heart-rending friendship between two psychiatric ward patients played by Valeria Bruni Tedeschi and Micaela Ramazzotti, and their incredible joint adventures in search of happiness. Like Crazy is distributed in Romania by Independența Film.