14.05.2015 16:16
13 filmmakers from Romania and Moldova were selected to be part of two training & networking platforms organized under TIFF Industry this year during the 14th edition of the Transilvania International Film Festival (TIFF) in Cluj-Napoca. 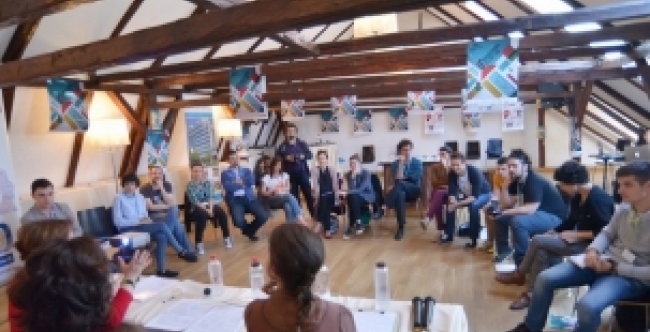 Transilvania Talent Lab (May 31 - June 5), a hands-on education programme for emerging filmmakers at the beginning of their career, is about to offer to its 8 participants a focused training on their film projects (fiction and documentary) tutored by two of the most active trainers in this field  – Sirkka Möller and Martina Bleis. The filmmakers will form 4 working groups (1 screenwriter/director + 1 film producer) going through all the levels of this intensive training with the goal of gaining as much experience as possible in the way a team director/scriptwriter+producer can work and interact in the most efficient way and also learning how to put their future movies on the right track to international cooperation.

Transilvania Pitch Stop (June 1 - 6) is a 5 days development workshop wrapping up with a pitching session, organized in partnership with Locarno Industry Days and Connecting Cottbus and with support from Festival Scope. The tutors this year are: Konstantinos Kontovrakis, Heretic - producer, and Christian Routh, ScriptEast - Head of Studies). The 5 selected projects will be tutored by the two and will go through a preparatory workshop. On the last day a public pitch will take place followed by pre-booked 1:1 meetings. Two projects are awarded and both will travel to Locarno for a tailor made matchmaking as part of a partnership with Locarno Industry Days that was signed since the first edition. The two awards are: TPS Development Award - 2000 Eur in cash offered by Transilvania IFF and CoCo Award - one project will be selected and offered the opportunity to be part of this year’s Connecting Cottbus East-West Co-Production Market projects line up. This year’s TPS jury members are: Roberto Olla (Executive Director, Eurimages), Matthieu Darras (Head of Studies, Torino Film Lab) and Elin Erichsen (Head of Development, Norwegian Film Institute).

This year, TIFF Industry hosts a large number of Masterclasses open to public. Among them, one masterclass will be dedicated to TPS & TTL participants only: Handling Ideas held by Paul Tyler. Paul Tyler has driven innovation through over 370 projects for more than 65 companies across 15 countries. He has helped the likes of Adobe (EMEA), Sundhed.dk (DK), Institute of Practitioners in Advertising (UK), Media Business School (ES), European Audiovisual Entrepreneurs (LU), the Danish & Swedish Film Institutes (DK) & (SE), Eyeworks TV (DK), The Royal Academy of Arts (UK) and three out of the four top ranked television stations in China – Hunan, Zhejiang & Anhui TV.

Back in 2006 Paul Tyler moved to Copenhagen to turn his twelve years of television and web production experience at the BBC to help others across Europe develop new concepts. It soon became clear that project teams working across a wide range of corporate, public and cultural sectors were wasting a huge amount of time, energy and money in the way they developed projects. He set out to change that.
Paul Tyler has developed the Handling Ideas method to give team members, no matter the skills or cultural background, a common language by creating a common knowledge and a clear understanding of their project’s goal and the different steps to that goal.

Also, TIFF Industry guests will have the chance to watch during Romanian Days a number of 31 productions in premiere plus a set of screenings special dedicated to invited only sales agents, buyers and festival programmers to have a first look at what are the upcoming Romanian productions ready to hit the cinemas.