28.03.2017 14:34
The program was included by Eurimages Fund among the European industry events to present the Eurimages Co-production Development Award amounting to €20,000. 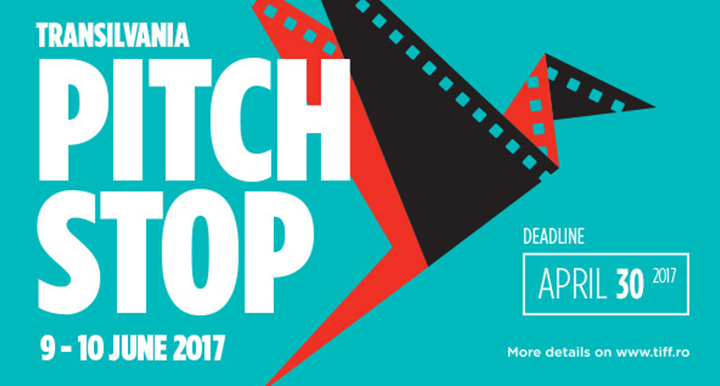 UPDATE: the new deadline for TPS submissions is April, 30th

The 16th edition of Transilvania International Film Festival announces increased joined activities related to film industry, as part of the continuous work to promote cinema and establish a platform for international co-production.

The 4th edition of Transilvania Pitch Stop (TPS), the successful initiative focused, until recently, only on development and pitching of local feature film projects, extends internationally as of this year. The program was included by Eurimages Fund among the European industry events to present the Eurimages Co-production Development Award amounting to €20,000.

TPS aims to discover a strong selection of projects from Romania and the countries around Romania destined for European co-production such as: Hungary, Bulgaria, Serbia, Ukraine, Russia, Moldova, Greece, Turkey and Georgia. The program aims to foster cross-border cooperation especially between the Black Sea countries and other countries invited to be part of the initiative.

“It's an honor for us to be among the 10 European festivals to grant the Eurimages Co-production Development Award. It's a sign of appreciation for the success of our industry-related initiatives throughout the years and for the efforts to boost international co-productions. We continue our mission, to discover young talents, by developing a platform for the countries around Romania and the Black Sea. It's always hard to co-produce for 1st and 2nd time directors, especially in this part of Europe”, says Dorina Oarga, Head of Industry, Transilvania IFF.

TPS will presents a selection of approximate 12 projects, coming from 1st and 2nd time directors, currently in development and financing to international film professionals, facilitating their international visibility and establishing the right connections to ensure financing for their projects. Directors and producers of the selected projects will be invited to the industry event organized by Transilvania IFF on June 9th & 10th, to publicly present their project, followed by one-to-one meetings and discussions.

A jury of international professionals along with a representative from Eurimages will award the Eurimages Co-production Development Award, which goes to one of the projects presented in the TPS co-production market.

Additionally, first and second time filmmakers from Romania and Moldova are eligible for the TPS development workshop, providing guidance on script development, as well as training and a platform for pitching the projects in front of prospective partners. Up to five projects will take part in a four-day workshop (between June 5th– 8th). Only two of them will be selected to compete, along with the international ones, for the TPS awards..

The regulations can be checked here.

In order to submit the project and the required material, applicants need to create an account on eventival.eu, following this link: https://vp.eventival.eu/tiff/2017

In 2017, the industry program at Transilvania IFF consists also of Transilvania Talent Lab (TTL), a workshop dedicated to professionals involved in the management of cinemas. Together with Shorts TV, Transilvania IFF will organize the second edition of The Pitch, giving filmmakers from Transylvania the chance to win a € 5,000 funding for their short film. This year, the festival will host project partners LIM - Less is More, the European platform for project development of limited budget feature films created by Le Groupe Ouest, and First Films First, an intensive professional training program aimed at supporting young Southeast European film directors to develop their first feature-length fiction film, initiated by Goethe-Institut Young Directors´ Academy South-Eastern Europe.

The industry program will also include closed screenings for industry members and special screenings of the newest Romanian films, debates and masterclasses, lining-up experts in audience development, and script writing, film directors.