World Premiere: "6,9 on the Richter Scale" by Nae Caranfil opens the 15th edition of Transilvania IFF 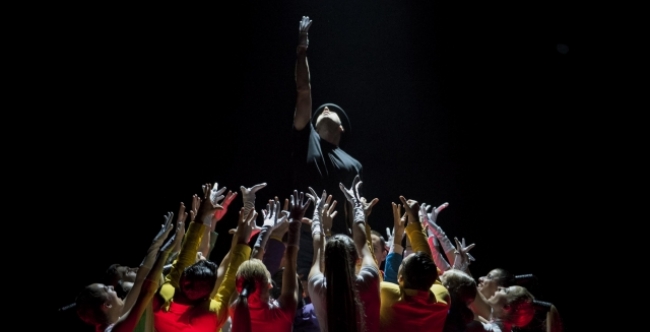 6.9 on the Richter Scale, Nae Caranfil's latest film, will have its world premiere during the opening gala of the 15th edition of the Transilvania International Film Festival (May 27-June 5). The author of Romanian box-office hits such as Filantropica and The Rest is Silence returns with his seventh feature film, a burlesque comedy with musical elements about midlife crisis, love, depression, and an obsessive fear of earthquakes.

6.9 on the Richter Scale will be screened in the Unirii Square on Friday, May 27, at 9:45 PM, in the presence of Nae Caranfil.

The opening gala will precede the screening from 8:30 PM and will include a memorable performance by the famous French band Transe Express. Street art pioneers, the dancers, acrobats, and musicians of Transe Express have already performed in 80 countries.  They opened, among other things, the 1992 Olympics Games in Albertville and the 2009 Ski World Championships in Val d'Isere.

Gala tickets are 30 lei and can be acquired from www.biletmaster.ro.

A comedy which is "partly realistic, partly unrealistic" according to writer-director Nae Caranfil, 6.9 on the Richter Scale is the story of a young theater actor who has a hard time balancing his complicated part in a musical comedy, a jealous wife bordering on depression, and the obsession with a great and devastating earthquake, announced as imminent by all the experts. But the true "earthquake" for him turns out to be the unexpected reappearance of his own father after decades of absence. Manipulative and amoral, he takes over his son's world, turning his whole existence upside down.

The film stars are Teodor Corban, Laurențiu Bănescu, Maria Obretin, and Simona Arsu. Vivi Drăgan Vasile is the Director of Photography, and Cătălin Cristuțiu is editor of the film. A Romania-Bulgaria-Hungary co-production presented at the 2014 Berlinale Co-production Market, 6,9 on the Richter Scale is produced by Mobra Film, Korund-X. and Cinemafilm, with support from Eurimages. The film will be distributed in Romania by Voodoo Films.

TIFF will end as spectacularly as it began, on June 5, in the Unirii Square, with Belgica, the film that brought Belgian director Felix van Groeningen the Directing Award at Sundance 2016. The author of The Broken Circle Breakdown, nominated for an Oscar in the Best Foreign Film category in 2014, returns with a drama about the ups and downs of a life full of excess, alcohol, sex, and drugs. The film follows the success and inevitable decline of the Belgica club, and was inspired by the true story of two brothers, owners of the famous Charlatan bar in Ghent. The great score of the film was composed by the band Soulwax, who created songs in different genres for the several fictional bands featured in the film.