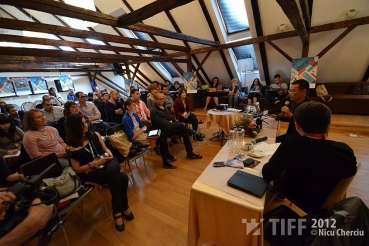 The first edition of Transilvania Talent Lab (TTL), the laboratory for people from cinema and film industry, ended Thursday, on June 7. For five days, eighteen youngsters met in the framework of TTL. They attended the classes held by director and screenwriter Richard Kwietniowski, Marta Lamperova, Artistic Director for Milano Film Festival and Olga Dykhovichnaya the producer for Twilight Portrait.

The first edition of TTL opened a necessary path in the process of Romanian film production. Until then, 18 brand new projects await to be finalized and transformed in to films.