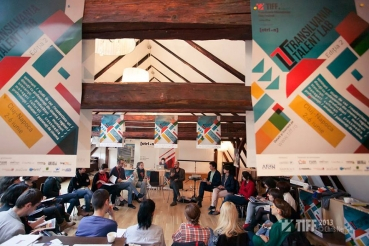 The 15 participants of the Transilvania Talent Lab will have a series of meetings, work sessions and discussions on their submitted projects and they will receive feedback, advice and ideas to refine them and to move forward. Thus, they will encounter different film personalities who will deepen the elements related to the three TTL modules: Development (developing a film project), Production (producing a film project) and Marketing, Distribution and Cultural Management.

The first module has as guest trainer the French script doctor Antoine Le Bos, artistic director of Le Groupe Ouest and of the European Centre for Film-Making in Britanny, a tutor within the script development workshop of Torino Film Lab. The second module brings to TTL producer/director Tudor Giurgiu and curator and script consultant Sirkka Möller, who has extensive experience in the selection of films, sales, project development and film education, being a member of the selection committee of the Panorama section of the Berlinale and the coordinator of Doc Station project of Berlinale Talent Campus.

The third module will be moderated by Mathias Noschis, a specialist in film marketing strategies with extensive experience in PR, advertising and branding, founder of Alphapanda (a film marketing agency specializing in digital area, with offices in London and Berlin) and a film marketing trainer for various organizations and workshops, including NTFS in the UK, MEDIA Desk in Germany, Spain and Belgium, the Producers' Workshop in Israel, New Horizons in Poland and FOCAL, in Switzerland.

In addition to the seminars, workshops and applied research on the 15 submitted projects, the TTL program will include a series of masterclasses open to the public.

All those interested to meet with film industry professionals can participate in the 2014 TTL masterclasses, which will begin on Monday, June 2, in the 15 Napoca Attic.

One of the most famous and influential producers in the UK, director of the National Film and Television School, vice-president of the board of the European Film Academy, Chairman of the Film Committee and member of the BAFTA board. In the 70's, he founded the famous Virgin Records label; a decade later, he founded Palace Productions, producing dozens of films, including Company of Wolves and The Crying Game by multi-Oscar nominee Neil Jordan. His new company, Scala Productions, has produced films such as Fever Pitch, The Neon Bible, Ladies in Lavender or Calendar Girls.

One of the most experienced and daring DoPs of the new generation of Finnish filmmakers. Throughout his career, he worked on both fiction and documentary films such as Concrete Night (directed by Pirjo Honkasalo, 2013) or Miss Blue Jeans (directed by Matti Kinnunen, 2012).

His feature film debut was a success: The Girl with a Pearl Earring, starring Scarlett Johansson and Colin Firth, earned him critical praise and nominations for three Oscars, two Golden Globes and 10 BAFTAs. Afterwards, Peter Webber was persuaded by Dino De Laurentiis to direct Hannibal Rising and, in 2012, he directed The Emperor, starring Matthew Fox and Tommy Lee Jones and winner of the Audience Award at the Palm Springs Intl. Film Festival. He’s currently in post-production with his documentary 10 Billion.

Since 1999, he’s been the Executive Director of the Israel Film Fund. The main Israeli film financing institution, the Israel Film Fund supports, encourages and promotes film production in Israel. Katriel Schory founded his own film production company in 1984 – BELFILMS LTD, which has produced over 200 feature films, both fiction and documentaries, television series and international co-productions.

Additional details about the TTL masterclasses guests, on: http://tiff.ro/ttl/masterclass

Transilvania International Film Festival (TIFF) is organized by Romanian Film Promotion and the Association for Film and Urban Culture, with the support of the National Film Centre.

Transilvania Talent Lab is a project organized by Romanian Film Promotion in partnership with the Control N Cultural Association and the Shift Association –Transilvania Art Grup, with the support of the National Film Centre and the Direction for National Cultural Funds.