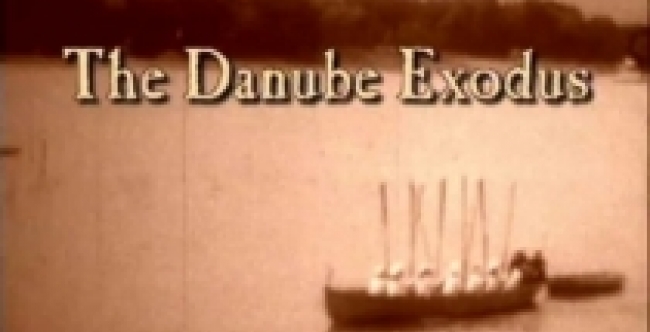 THE DANUBE EXODUS: THE RIPPLING CURRENTS OF THE RIVER by Peter Forgacs & The Labyrinth Project.

Based on Peter Forgacs’ 1998 documentary The Danube Exodus and its research materials, produced by Lumen Film.

The Labyrinth Project is a research initiative at the University of Southern California’s School of Cinematic Arts, Los Angeles, CA.

Péter Forgács (1950), media artist and independent filmmaker, based in Budapest. Since 1978 he has made more than thirty films and several media installations. He is best known for his "Private Hungary" series of award winning films and installations often based on home movies from the 1920s-1980s, which document ordinary lives that were soon to be ruptured by an extraordinary historical trauma that occurs off screen.

Since the early 1990s Forgács' video installations have been presented at museums and art galleries throughout Europe and America. His international debut came with The Bartos Family (1988). Since then he has received several international festival awards - in New York, Budapest, Lisbon, Marseilles, San Francisco and Berlin, where he won the Prix Europa for his Free Fall film in 1997.

Between 2000-2002 Péter Forgács was artist in residence at The Getty Museum/Getty Research Institute, Los Angeles, where he created the installation The Danube Exodus - The Rippling Currents of the River. His works can be found in several museums and public collections. In 2007 Forgács was awarded with the most prestigious Dutch Erasmus Prize for his notable contributions to European culture. In 2009 Forgács represented Hungary at the Venice Biennale, exhibiting the Col Tempo - The W. Project installation.

Forgács “has given the private archive project an ontological dimension, turning it into a reflection on the nature of memory, the construction of history, and the phenomenology of film-making itself”, media theorist Joanne Richardson commented on the artists' works.

Transilvania International Film Festival celebrates Péter Forgács's work with a Retrospective comprising six of his most renowned works. The documentary The Danube Exodus is among them. It documents the Jewish exodus from Slovakia just before the beginning of World War II. In two boats, a group of nine hundred Slovak and Austrian Jews tried to reach the Black Sea via the river Danube, in order to get to Palestine from there. Péter Forgács based his film on the amateur films of Nándor Andrásovits, the captain of one of the boats.

Free Fall uses the home movies of talented  musician and photographer György Pető and succeeds in showing how the Petős tried to ignore the threatening signs foreboding the Holocaust before World War 2. Private films are also used for El perro negro, which explores personal dramas, the illusions, the desperation, and the unseen side of the insane Spanish Civil War. As for Angelos' Film, it documents, through the images shot by Angelos Papanastassiou with a clandestine 16-mm film camera, the atrocities suffered by the Greeks in Athens during the three years of German-Italian occupation in World War II.