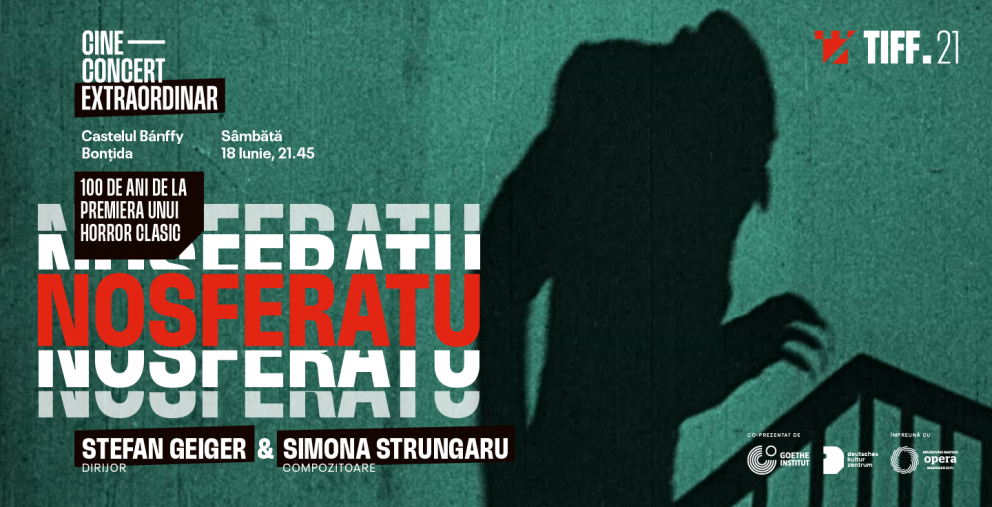 In 1922, a film was launched on the big screen that would revolutionize the world of cinema, defining the horror genre. 100 years later, the Transilvania International Film Festival brings it back to the public, in an exceptional cine-concert, presented for the first time on June 18, in the spectacular setting of Bánffy Castle in Bonținda. NOSFERATU, the German masterpiece signed by the legendary director F.W. Murnau will perform outdoors on the first weekend of the festival, accompanied live by the artists of the Hungarian State Opera in Cluj-Napoca, on original music composed by Simona Strungaru, under the baton of German conductor Stefan Geiger. The project is co-presented by the Goethe Institute and the German Cultural Center Cluj-Napoca.
Tickets can be purchased in advance from the Eventbook platform: https://bit.ly/nosferatu-TIFF2022 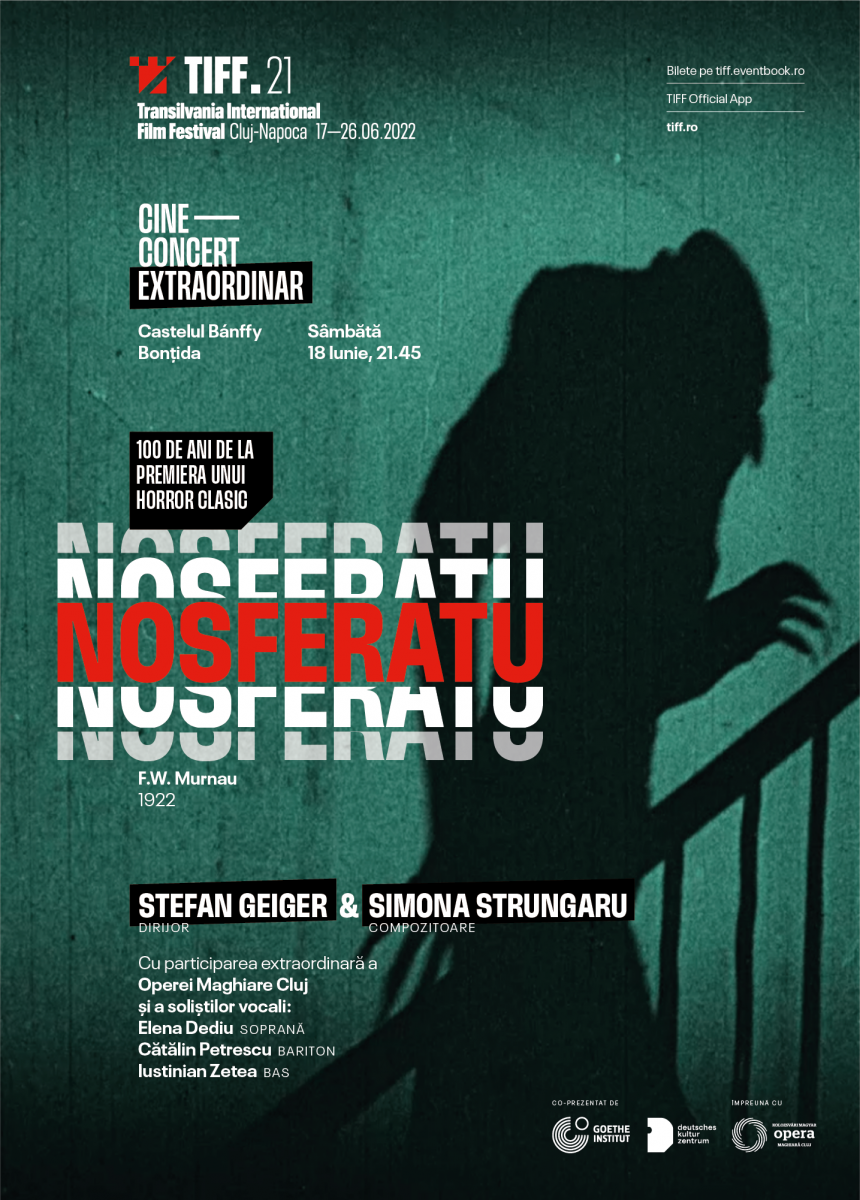 "One of the most poetic horror films of all time" (Time Out Magazine), NOSFERATU is based on the novel "Dracula", written by Bram Stoker, and is one of the reference works of German expressionism. His appearance on the big screen terrified the audience and caused waves of criticism. After Stoker's heirs sued the film's creators in court, accusing him of copyright infringement, in 1925 it was decided to destroy all copies. Some of it have survived, and after decades of research, NOSFERATU will be able to be seen at TIFF in a version faithful to the one presented a century ago.
In the film, Thomas Hutter is the secretary of a real estate agent in Wisborg, where he lives happily with his wife Ellen. One day, his boss sends him to Transylvania on business, to negotiate with Baron Orlok to buy a house. Ellen feels that something is wrong, she is aware of the danger that threatens her husband, but she fails to convince him not to leave. As night falls, Hutter meets Orlok, the strange master of the house, the iconic character played by Max Schreck and considered by critics to be the father of all the bizarre creatures that later came to life on the big screen.
At #TIFF2022, NOSFERATU will be presented in a restored version by the Friedrich-Wilhelm-Murnau Foundation in Wiesbaden. The musical performance offered by the 27 soloists of the Hungarian State Opera in Cluj-Napoca, including soprano Elena Dediu, along with Cătălin Petrescu (baritone) and Iustinian Zetea (bass), will be completed by the sound of a specially designed instrument for this concert by the composer Simona Strungaru and the sculptor Misha Diaconu.

Invited for the second time to TIFF, after the spectacular show offered in 2017 at the Metropolis cine-concert, the conductor Stefan Geiger has in his portfolio dozens of sound illustration projects of some masterpieces of cinema. He has been conducting the Bremen Youth Orchestra since 2002, and for the 2016/2017 season, he was elected principal conductor of the Parana Symphony Orchestra in Brazil. He conducted in Cluj the concerts-Adventures of Prince Achmed, in 2013, and Pandora's Box, in 2015.

An equally famous name for the spectators of the Transylvania International Film Festival, the composer Simona Strungaru is the permanent conductor of the Bucharest Jazz Orchestra and Sonomania, she composed symphonic suites for orchestra, live electronics and live street art, soundtracks for animations and musicals. In 2016, the artist conducted the Hungarian Opera Orchestra in Cluj, in a memorable cine-concert at Banffy Castle: Haxan, and in 2021, she performed at TIFF her own version of the Malombra soundtrack with Sebastian Burneci (trumpet) and Adi Tetrade (percussion).