The 2021 Official Competition. Guillermo Arriaga in the Jury 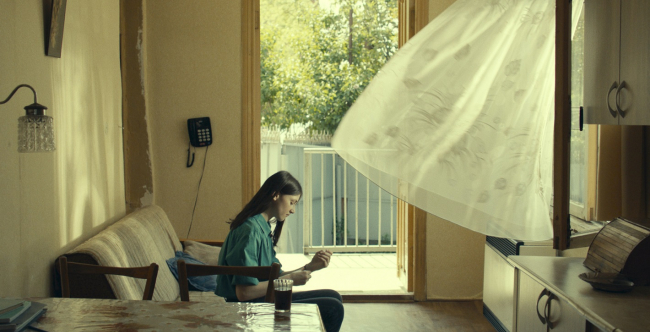 The jury of this edition includes Mexican screenwriter, author and producer Guillermo Arriaga, well known for his scripts for films such as Amores Perros, 21 Grams, Babel (nominated for an Academy Award for Best Original Screenplay in 2006), and The Three Burials of Melquiades Estrada (Best Screenplay at Cannes); Katriel Schory, Executive Director of Israel Film Fund and founder of Belfilms, who produced over 150 features, series, and documentaries; American actor, director, and producer Scott Coffey — director of Ellie Parker, and known for his roles in Some Kind of Wonderful (dir. John Hughes) and Mulholland Drive (dir. David Lynch); and Romanian actor Maria Popistașu, the female protagonist in Întregalde (Quinzaine des Realisateurs, Cannes 2021), known for her roles in Romanian New Wave films such as Tuesday, After Christmas or Love Sick.

The fifth member of the Jury will be announced soon.

Preparations to be Together for an Unknown Period of Time, dir. Lili Horvát (Hungary)

What Do We See When We Look at the Sky, dir. Alexandre Koberidze (Georgia, Germany)

Two Romanian films stand for the Transilvania Trophy: Eugen Jebeleanu’s debut Poppy Field tells the story of a gendarme whose professional life is threatened by his relationship with another man; Bogdan George Apetri’s thriller Unidentified follows a police investigation that throws its anti-hero protagonist in a dark, violent world.

Alexandre Koberidze’s What Do We See When We Look at the Sky turns the warm atmosphere of a Georgian town into the backdrop for a seductive love story for a star-crossed love story between two lovers cursed never to recognize each other again. Lili Horvát’s  second feature and Hungary’s Oscar’s proposal this year, Preparations to be Together for an Unknown Period of Time tells the story of Marta, a successful neurosurgeon ready to risk everything for a relationship with a man who pretends not to know her.

As the Internet makes its way into the isolated communities of the tundra, the mirage of a new world follows: Philipp Yuryev’s The Whaler Boy (Russia) follows a young man setting off on a long journey in the hope to meet a girl he fell in love with online. Marat Sargsyan’s war drama debut The Flood Won't Come (Lithuania) revolves around a famous colonel involved in armed conflicts abroad and forced to return to do battle in his own homeland.

Cate Blanchett executive produced Christos Nikou debut Apples, which was initially presented at Transilvania Pitch Stop in the development phase. The Greek film explores a world devoured by an aggressive memory-eating virus. Any resemblance to the current pandemic context is purely accidental here, as in in Iuli Gerbase’s Sundance selection The Pink Cloud, coming from Brazil: a simple one-night stand turns into a long period of cohabitation for two strangers who are forced to isolate together to survive a strange weather event.

Inspired by the story of his sister, who travelled 13 kilometers to save herself from an abusive husband, P.S. Vinothraj’s Pebbles (India) reverses the roles and focuses on a male protagonists driven by remorse to walk barefoot to look for his wife. Spanish director David Martín de los Santos makes his debut with That Was Life, the emotional story of a life-altering encounter between two women from different generations.

Forced to adopt her teenage nephew, a woman on her way to becoming a nun tries to find a balance between her calling and her new family obligations in David Bonneville’s The Last Bath (Portugal). Finally, another film that plumbs faith is Daria Woszek’s Marygoround, a Polish black comedy in which a woman’s beliefs are bitterly tried by the hormonal changes associated with menopause.