Another successful edition of the Romanian Film Festival in NYC 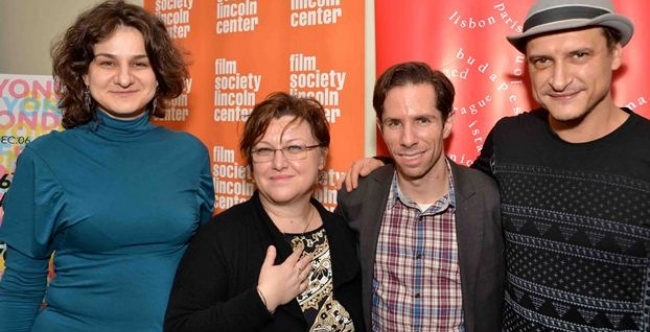 More than 2700 viewers were present at the Film Society of Lincoln Center at the 6th edition of the Romanian Film Festival in New York City - BEYOND, organized by the Romanian Cultural Institute in New York and dedicated to film critic Alex. Leo Serban. Hosted for the first time by the prestigious Lincoln Center, the cultural heart of New York, the largest and most durable event dedicated to Romanian cinema abroad confirmed the constant growth among the audience and among the film industry in NY, already registered in the first 5 editions.

This year’s festival offered not only a change in location and partnership but also in scope and structure. In addition to an extensive offering of World and US premieres, the festival also presented two in-depth retrospectives celebrating the remarkable career of Liviu Ciulei (FOREST OF THE HANGED) and New Wave director, Radu Muntean (TUESDAY, AFTER CHRISTMAS).

The Romanian Cultural Institute in New York and FSLC dedicated the 2011 edition of the film festival to the memory of Romanian film critic Alex Leo Şerban. For the past five years, Şerban has been the special guest of the Romanian Film Festival in New York and its most accurate and informed witness. The Romanian New Wave in cinema recognized in Alex Leo Şerban not only an uncompromising analyst, but also a mentor, who was an active international voice on behalf of Romanian cinema with many American organizations.

Previous editions of the festival featured an emphasis on showcasing the best and most recent films from Romania’s contemporary cinema, but this year saw an expansion in offering a week-long presentation for the first time ever, offering an overview on the latest Romanian premieres - such as Marian Crişan’s MORGEN, Constantin Popescu’s PRINCIPLES OF LIFE, Cătălin Mitulescu’s LOVERBOY, Bogdan George Apetri’s OUTBOUND or Radu Gabrea’s RED GLOVES – as well as a broad array of special programs providing a more complex perspective on Romanian Cinema.

Among the highlights of the festival this year were two special events. First and foremost, the festival honored Liviu Ciulei, one of the legendary masters of Romanian theatre and film, who passed away this October. New York audiences also got the chance to see, in new prints, the very first U.S. retrospective of Ciulei’s outstanding directing career including ERUPTION (1957), DANUBE WAVES (1959), and FOREST OF THE HANGED (1964). Star of DANUBE WAVES, Irina Petrescu and Romanian film critic Magda Mihăilescu introduced select screenings and participated in post-screening Q&As.

The festival’s second major event focused on director Radu Muntean, one of the most active directors of the Romanian New Wave. One of the toasts of the 2010 Cannes and New York Film Festivals for his masterful marital drama TUESDAY, AFTER CHRISTMAS, Muntean returned for a retrospective of his remarkable body of work, including the world premiere of his new HBO documentary, VISITING ROOM, and an extended conversation with Film Society Associate Program Director Scott Foundas.

Other special events included a celebration of the New Romanian cinema, featuring the 10-year anniversary screening of Cristi Puiu’s seminal debut STUFF AND DOUGH, followed by a panel discussion with top U.S. and European critics, and a fundraising event dedicated to RCINY’s initiative The Andrei Şerban Travelling Academy, organized in collaboration with the MARA Society.

The Romanian Film Festival in New York City was initiated in 2006 as a partnership of the Romanian Cultural Institute in New York (RCINY) with the Transilvania International Film Festival (TIFF) and Tribeca Cinemas. The partnership with TIFF, Romania’s leading film festival, which continues this year, has extended beyond the NYC festival to facilitate the presence of American film professionals to the past two editions of TIFF, an initiative that will continue and expand. Initiated and chaired by Corina Şuteu, director of RCINY, the festival selection committee also includes Mihai Chirilov, Artistic Director, Scott Foundas, Associate Program Director of FSLC, and Oana Radu.