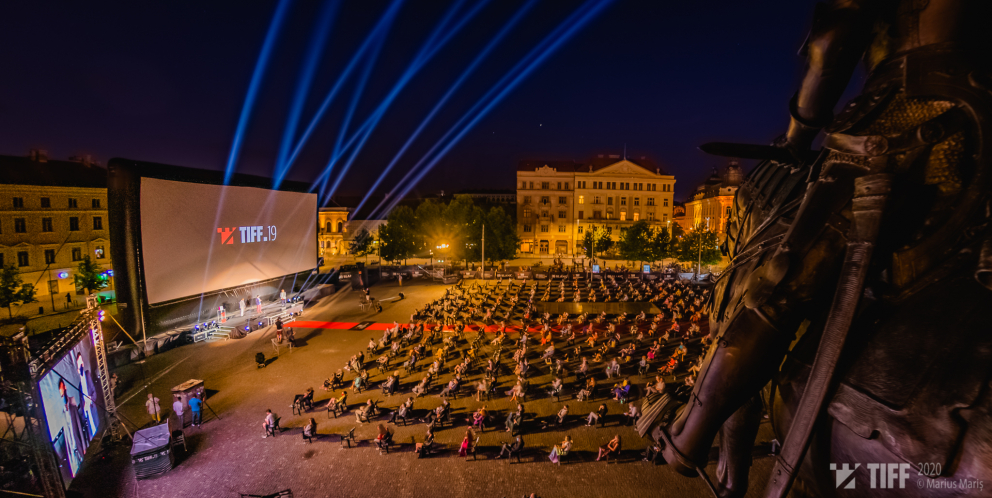 The  best films and filmmakers of this year’s edition was rewarded Saturday, August 8, at the awards gala of the Transilvania International Film Festival, which took place outdoors, in Cluj-Napoca’s Unirii Square for the first time in the festival’s history. Shannon Murphy’s debut film Babyteeth, starring Eliza Scanlen won the 10,000 euros Transilvania Trophy “for the joy of life told through the experience of our passage beyond”.

The Audience Award voted on by all TIFF ticket-holders and offered by Mastercard, also went the same film as the jury award: Babyteeth. Both awards were picked up by the films Romanian distributors, Bad Unicorn.

The official competition jury, made up of producer Ada Solomon, director Adina Pintilie, actor András Hatházi, playwright Csaba Székely, and writer Philip O Ceallaigh also picked the ex-aequo winners for the Best Directing Award, worth 3,500 euros: Tim Mielants’s Patrick impressed the jury with a story that “managed to create a wonderful yet strange world with the most natural ease” and Zheng Lu Xinyuan, for The Cloud In Her Room, “this cinematic/ cinephile delight reveals a remarkable emerging talent to watch”.

For its “for the incisive foray into the private life of a woman in crisis,” actor Evgeniya Gromova, the star of Fidelity, received the Best Performance Award, consisting valued at 1,000 euro and offered by Conceptual Lab. “I am happy to see that life hasn’t stopped just like that and that this festival does take place, and I am grateful to be among the winners.” she said in a video message. The Special Jury Award worth 1,500 euro and offered by HBO, went to Svetla Tsotsorkova’s Sister, “a strange, surprising, comic tale in which a trail of lies leads to the truth.”

500 guests, audience members, and journalists were at the gala hosted by Festival President Tudor Giurgiu, together with TV star Amalia Enache, and broadcast life. The event, which was organized according to social distancing regulations and taking all relevant safety precautions, started off with a musical moment from the Osoianu Sisters. A special guest at the event, beloved pop artist Marina Voica sang two popular pieces from her long-running repertory. And, in honor of her 40 years in theater and film, actor Maria Ploae, a “paragon of sensitivity without whom the history of Romanian film would have looked very different,” also received the Excellence Award, offered by Mercedes-Benz and handed by television journalist Cătălin Ștefănescu.

Present at the event, Minister of Culture Bogdan Gheorghiu handed the Romanian Days Award for Best Feature Film, valued at 10,000 euros in film stock and production services offered by CineLabs Romania, to Radu Ciorniciuc, the director of Acasă, My Home. “We hope that the film is a springboard for discussion about the necessity of individual involvement,” said the film’s producer Monica Lăzurean-Gorgan.

The Romanian Days Award for Best Debut, valued at 1,000 euros and offered by the Transilvania Bank, went to Dorian Boguță’s Legacy. A special mention went to Ivana Mladenović for Ivana the Terrible, which “for bravely exposing a wounded soul in a charming, tender and uniquely personal way.”

The FIPRESCI Prize offered by the International Federation of Film Critics to a title in the Romanian Film Days section went to Everything Will Not Be Fine, Adrian Pîrvu and Helena Maksyom’s documentary road movie that follows the lives of young people affected by the Chernobyl disaster. Andrei Zincă’s So, What's Freedom? received the Romanian Days Audience Award, valued at 1,500 euros and offered by Dacin Sara.

Sarra Tsorakidis’s Kaïmós won the Romanian Days Award for Best Short Film, in amount of 1,500 euros, offered by UCIN and camera & electric & grip equipment services, offered by CutareFilm, in amount of 5,000 euros. The jury also awarded two Special Mentions to Alina Șerban’s Letter of Forgiveness and to Radu Gaciu’s Death and the Knight.

Journalist Alexandra Tănăsescu won the Alex. Leo Șerban Scolarship this year; the 2,500 euro award offered in partnership with Conceptual Lab will support the development of the online portal Cultura la dubă. A Special Mention valued at 500 euros went to film critic Victor Morozov for his volume Cross-border. Romanian Cinema in a Transnational Context. And for his turn in Monsters, actor  Cristi Popa a received the other special mention, valued at 1,000 euro and offered in partnership with Conceptual Lab to a young actor who played a notable role in a film launched in the previous year.