Dark Drama and Endless Suspense in the Shadows Section 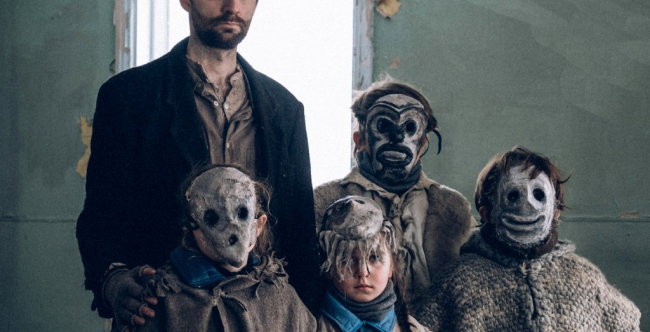 No, it’s the experience of seeing a good horror screened in one of the darkest sections of the Transilvania International Film Festival: Shadows, which brings to Cluj 12 intense features and just as many shorts produced over the past year. The section is presented by the Fantasy Film Fest and the Full Moon  Horrow and Fantasy Film Festival and curated by Artur Brzozowski

Tickets are available online at https://tiff.eventbook.ro/ or directly in the official TIFF application available in the Apple App Store and on Google Play.

You will probably think of  In Fabric every time come across a sale in a clothing store. In this most recent film from Peter Strickland (Katalin Varga), the protagonist finds out that her most recent purchase, a red dress, is cursed and brings only bad luck to its wearers. Gwen, directed by William McGregor, revolves around a similarly unlucky heroine whose attempts to keep her family afloat come to nothing as curse after curse invades her home, along with the Industrial Revolution. The film screened at Toronto in 2018 and was nominated for important awards.

Bizarre ocurrences take hold of a community following the tragic disappearance of one of its members in Ghost Town Anthology, the most recent feature from director Denis Côté, who this year is part of the Official Competition Jury. Time loses all meaning in this film, which was first screened in the Berlinale competition. Another film in which time and space are perturbed is Jagoda Szelc’s Monument, in which a group of students discovers that the isolated hotel in which they are interning holds terrifying surprises.

In Antonio Tublen’s Zoo, Karen and John have the difficult task of saving their marriage while the zombie apocalypse rages outside. Barricaded in their house, the two estranged spouses are forced to find each other once more and bring their love back to life. The undead are a threat also in the Brazilian horror The Nightshifter from Morto Não Fala, in which a man with paranormal abilities bears too much of his soul to the deceased temporarily residing in his morgue, endangering his family. And the protagonist of the Kyu-Jang Cho’s Korean thriller The Witness also ends up in danger after accidentally witnessing a bloody murder from his window in the dead of night.

Nothing brings us close to death as the fear of death, and this is precisely what happens to Juri, the main character in Xaver Bohm’s O Beautiful Night, who finds his great love during an adventure-filled night at the end of which one half of the new couple has to give up this world.

In Rasmus Kloster Bro’s Cutterhead, a young PR professional finds herself underground with two miners following an accident in the tunnel she was supposed to promote. Each of the underground prisoners is forced  to reevaluate their vision of life. Another female protagonist forced into isolation by circumstance leads Zach Lipovsky’s Freaks — a woman who will not be prevented from starting an adventure with a stranger despite her father forbidding her to leave the house.

Neither remorse nor the violence of the outside world prevent Simon in All the Gods in the Sky (dir. Quarxx) to try everything to save his little sister who suffers from a major disability — and salvation comes from a very unexpected place. Salvation is what the protagonist of Peter Brunner’s To the Night, Norman,  needs, as the sole survivor of a fire that consummated his childhood. Life throws him into an unbelievable adventure which tracks a series of flames that may hold the power to cure what ails him.

A little horror, a bit of fantasy, and a dash of surrealism are the ingredients of the titles selected for the Shadow Shorts section. Each set of shorts is a journey outside the comfort zone of the audience members, opening doors towards new worlds in which imagination and supernatural forces rule over conventions, trends, or just commonplace storytelling.

The jury for the Shadows section is comprised of: Andreas Marschall, director, writer, and painter, who was himself part of TIFF’s earlier programs with two of his most successful horrors: Masks and German Angst, co-directed with Jörg Buttgereit; Cyril Despontin, founder and collaborator for many European horror and fantasy festivals, including Hallucinations Collectives in Lyon and the Paris International Fantastic Film Festival; and Romanian director Nicolae Constantin Tănase, whose first film The World Is Mine won Best Debut in TIFF’s Romanian Days in 2015 as well as a Special Mention in the East of West section of Karlovy Vary, followed by seven Gopo nominations and two Gopo awards.