Highlights from Day 5 at TIFF

04.06.2012 18:17
Special Screenings, discussions, a jazz concert and a meeting with Kjartan Sveinsson, keyboardist from Sigur Rós, and member in the Competition Jury are just ones of the highlights of the fifth day at Transilvania IFF. 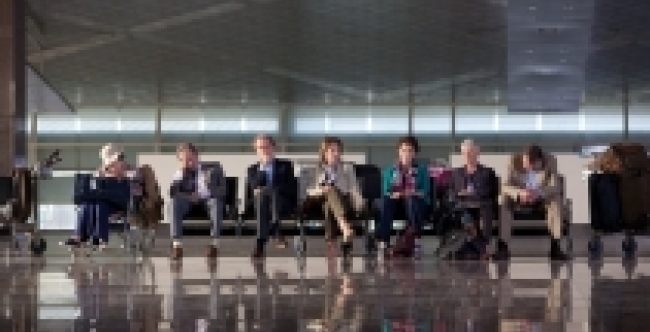 Kjarta Sveinsson will meet the audience on Tuesday, June 5, from 17.00 at TIFF Lounge. The discussion is moderated by Mihnea Măruță. Another meeting with the Icelandic artist will be after the special screening of Inni (d. Vincent Morisset), 23.30, at Cinema Florin Piersic.

At 15.00 at Napoca 15, another special guest, director Timo Vuorensola will talk about the new on-line fund-raising techniques in a masterclass in the framework of Transilvania Talent Lab. Vuorensola directed the spectacular Iron Sky which will be screened on June 6, at Ursus Open Air (Unirii Square).

In the evening, from 20.15 during the World Environment Day, a debate on environmental issues will take place at Klausenburg Café / TIFF Café . The debate will be connected also with the screening of  GasLand (d. Josh Fox), from EcoTIFF section. Trish Adlesic, GasLand’s producer, will take part at the discussion.

At 20.30 at Casa TIFF , Adelin Petrișor, the only Romanian journalist who had a chance to film in North Korea, invites the public at a debate on the subject of „North Koreea- nothing to envy”, about the world’s most secluded country. The journalist wil present a TV report and a series of photos taken at the 100 Anniversary of Kim Ir Sen birth.

The filmgoers can recall the past editions of the festival in Şerban Mestecăneanu’ exhibition which will open tomorrow at 18.30 at Hotel Continental.

The already established charity screening for the benefit of the Art Museum is scheduled at Casa de Cultura a Studentilor from 19.00. The Best Exotic Marigold Hotel (d. John Madden) is a comedy starring Judi Dench, Maggie Smith and Tom Wilkinson.

At TIFF Art (Art Museum) starting at 21.30 is the screening of one of the most beautiful documentaries about Romania- Wild Carpathia.  DJ Nico de Transilvania, who composed the score for the documentary, will attend the screening.

Pen-Ek Ratanaruang, one of the most significant directors of the new wave in Thai cinema, is one of TIFF’s special guests. At 21.30 at Casa de Cultura a Studentilor the audience will see the filmmaker’s most recent feature film Headshot, one of the highlights of the new festival section Gods and Men. Moreover, the public will be able to meet Pen-Ek Ratanaruang within framework of a Transilvania Talent Lab master class, Wednesday, June 6, at 15.30.

Nils Petter Molvær Trio comes to Casa TIFF for a special concert at 22.00 with  one of Jazz Fusion pioneers, Nils Petter Molvær. The artist - jazz trumpeter, composer, and producer- earned his reputation as a key figure in the Norwegian scene after the release of 1997 album Khmer. The price is 20 lei/ticket.

Jan Harlan, Stanley Kubrick producer, will meet the audience after the screening of O Lucky Malcom! at Cinema Arta, at 17.30. The documentary follows Malcom McDowell, the star from A Clockwork Orange who speaks about his life and career.

A Man’s Story is schedulled at 20.00 at Cinema Arta. After the screening director Varon Bonicos will speak about the amazing story of his protagonist, Ozwald Boateng, who designed clothes for the crème de la crème in Hollywood.

A experience to remember will be the Serbian film, The Parade. Director Srdjan Dragojevic and producer Mike Downey will attend the screening, in Ursus Open Air, at 21.45. This turbulent farce that toys with clichés and stereotypes turned out to be an unexpected hit in Serbia and won the Prize of the Ecumenical Jury at Berlin International Film Festival.