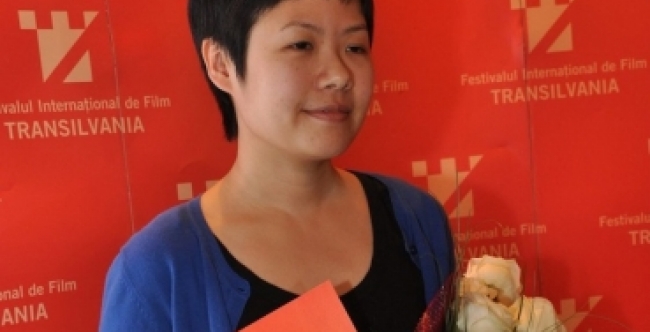 Thai film Mundane History is the winner of the 2010 Transilvania Trophy. Director Anocha Suwichakornpong received the honours on the stage of the National Theater in Cluj-Napoca at the Award Ceremony of the 9th edition of the Transilvania IFF, held on Saturday evening, June 5th. The jury characterized her film appreciated “its unconventional structure and eclectic use of images in this moving story, showing the underlying themes of how painful life can be and the fact that people need one another despite being on different social levels”.

Suwichakornpong received the trophy from the hands of European Film Academy president, director Wim Wenders, he himself being honoured with the Lifetime Achievement Award presented to an outstanding personality of European cinema.

Actress Ozana Oancea was another big winner of the night, geting both the Best Performance Award in the festival's Competition and the Romanian Days Award for Best Debut for her part in First of All, Felicia  by Razvan Radulescu & Melissa de Raaf. Radulescu and de Raaf also won the Best Screenplay Award.

It was a good night for Romanians in the Competition, Calin Peter Netzer, director of Medal of Honor, winning the Best Directing Award. His leading actor, Romanian legend Victor Rebengiuc, former recipient of the Lifetime Achievement Award, getting acclaimed for the Best Performance, together with Ozana Oancea. Actress Monica Birladeanu welcomed Ozana Oancea on stage, speaking in the name of the jury: First of all, we have the pleasure of recognizing the impressive achievement of Ozana  Oancea with the Best Actress Award for her first main acting role in a feature film as the brow-beaten Felicia.

The Best Cinematography Award went to Magnus Nordenhof Jonck, creator of an evocative camerawork for Tobias Lindholm and Michael Noer’s R, which makes the claustrophic atmosphere on the hardcore ward of Denmark’s toughest prison painfully palpable, as the jury member stated.

Florin Serban's If I Want to Whistle, I Whistle was recognized as the Best Feature Film in the Romanian Days, while Adrian Sitaru's  The Cage won the Romanian Days Award for Best Short Film. The Romanian Days feature film jury consisted of film critics Boyd van Hoeij and Klaus Eder and programmer Sirkka Moeller, while the 19 films in the shorts' competition were judged by directors Sevda Kozareva, Goran Odvorcic and Stanca Radu.

Chilean director Sebastian Lelio, winner of the Transilvania Trophy in 2007 and member of the jury in 2008, got another reward in Transilvania, as his film Christmas (Chile, 2009) was the FIPRESCI jury's favourite. Carmen Gray, Josephina Sartora and Mihai Fulger composed this year's FIPRESCI jury in Cluj-Napoca.

Cult figures of the Romanian cinema were not ignored this year either in Transilvania IFF: director Liviu Ciulei received the Excellency Award, while actress Dorina Lazar came on stage to collect the Lifetime Achievement Award for an outstanding personality of Romanian cinema.

This year's edition of Transilvania IFF has broken all the records in the festival's history, offering the Cluj audience 240 films from 47 countries all around the world, and bringing in Transilvania more than 480 Romanian and foreign guests during the ten days of festival – May 28th – June 6th.

Transilvania IFF officialy closes on Sunday, June 6th, with the special screening of The Autobiography of Nicolae Ceausescu, directed by Andrei Ujica, hosted by the Republica Cinema at 6 PM.