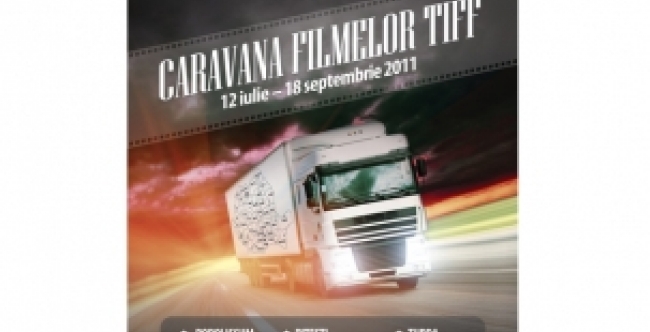 Romanian Film Promotion (APFR), the organizer of the Transilvania International Film Festival (TIFF), continues their vast project, TIFF Film Caravan/Operation Kino, together with the Film Festivals in Sofia, Sarajevo and Istanbul, a project supported by the EU program, MEDIA Mundus.

The 3rd edition of the Caravan will take place between the 12th of July – the 18th September 2011 and it will have 13 destinations: Porolissum, Zalău, Timişoara, Mediaş, Piteşti, Râmnicu Vâlcea, Braşov, Călăraşi, Turda, Oradea, Tulcea, Siret, Rădăuţi.

The TIFF Film Caravan is the main project of the national campaign started by APFR back in 2009, aiming to bring the Romanian audience back to the cinema, to offer to cinephiles special 2-3 days events screening films that have received awards during the past 2 years, successful films, the newest Romanian films, art films, as well as mainstream films, offering the public a unique festival atmosphere.

The TIFF Film Caravan 2011 starts in Sălaj County, on the 12th of July, in a special location – the Porolissum Archeological Complex, a huge open-air museum and one of Sălaj’s landmarks as a local, regional and even European tourist highlight. At 21:30, in the Roman Amphitheatre, the special screening of Morgen (2010, directed by Marian Crişan), which received the Best Feature award at the Romanian Film Days, at the 10th edition of the Transilvania International Film Festival (3-12.06.2011, Cluj-Napoca).

The TIFF Caravan in Sălaj will continue on the 13th of July, in Piaţa 1 Decembrie, in Zalău, with another Romanian film screening, Ursul (The Bear), the comedy of the year 2011, directed by Dan Chişu, the film with the most viewers at an open air screening at this year’s TIFF.

Among the films to be screened within the 3rd edition of the TIFF Caravan/Operation Kino: Biutiful (2010, Mexico–Spain, directed by Alejandro González Iñárritu), an impressive  drama that brings Javier Bardem back in the lime light, in a role that got him a series of nominations for the most important awards (Oscar, BAFTA, etc), as well as the Best actor award at the Cannes Film Festival 2010, I am love (Italy, 2009, directed by Luca Guadagnino), a film very well-received by critics all over the world, nominated for the Golden Globes and the BAFTAs 2011 for the Best foreign film, The Illusionist (France, 2009), directed by Sylvain Chomet, nominated for the Oscars and the Golden Globes 2011, for Best animation film.

Among the mainstream films that the cinephiles will enjoy in the Caravan, especially during the open-air screenings, we have The Way Back (USA, 2010, directed by Peter Weir), where Dragoş Bucur stars alongside Ed Harris, Colin Farrell and Saoirse Ronan, in one of the most spectacular roles of his career. And 127 hours (USA-UK, 2010), directed by Danny Boyle, will keep the audience on the edge of their seats during the real life story of the remarkable adventure of mountaineer Aron Ralston (James Franco) struggling to save himself after a boulder fell, crushed and nailed his arm, in an isolated, deep crack in a Utah canyon. The film got no less that 6 nominations at the 2011 Academy Awards, among which Best film and Best actor in leading role.

During the 2 successful editions of the TIFF Film Caravan, the audience proved to be extremely receptive to the APFR initiative. In 2010, over 15,000 people chose to enjoy the films presented by the Caravan.

The TIFF Film Caravan is part of the Operation Kino international project, a project initiated by the Romanian Film Promotion together with 4 other partners in the Balkans: the Sarajevo Film Festival (Bosnia & Herzegovina), the Sofia Film Festival (Bulgaria), respectively the Istanbul Film Festival (Turkey), and with Reelport, one of the main players on the European digital film market. By involving Reelport in the project, part of the Operation Kino schedule will be available online for potential film buyers, as well as for important film festivals the world over.

The project, in its current form, is implemented for the second time in a row in all 4 territories, being co-financed by the Union European program MEDIA Mundus.

The main objective of the MEDIA Mundus program is to encourage the exchange and circulation of audio-visual works originating from the MEDIA program member states, as well as from third party countries (which are not part of this program).

More details on the 2011 TIFF Caravan time table and the schedule from each city are available on www.tiff.ro.