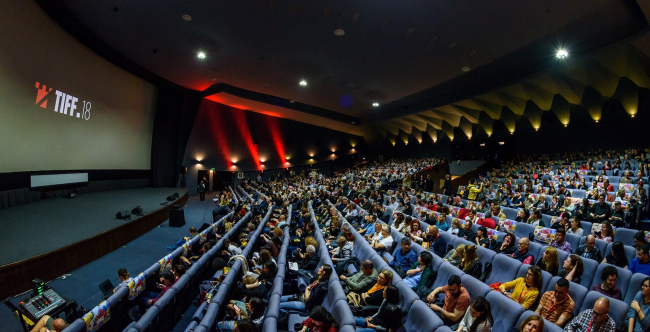 The world premiere of Tudor Giurgiu’s most recent feature Parking opened the 18th edition of the Transilvania International Film Festival on Friday night. Organizers and audiences lost the bet against the weather forecast, so they had to withdraw from the Open Air screening into cinema theaters, where applause was the only thing that rained on the film.

The most important news of the night was the launch of the TIFF Unlimited platform starting with June 6. In Giurgiu’s words, the future of TIFF “must be a mix of traditional and digital, between cinema screenings and streaming done right.” And so, in the year it is finally coming of age, TIFF enters the VoD era. Conceived as an extension of TIFF after the end of this edition, the platform will allow subscribers to view films selected by the programming team of the festival. Reduced subscriptions are available until June 9, including one free week on unlimited.tiff.ro. All three types of subscription available to the general public come with one month of free access to all films on the platform.

TIFF Artistic Director Mihai Chirilov thanked the brave audience that battled the weather and dedicated a moment to the memory of Tudor Caranfil, beloved film critic and film historian who passed away in March of this year.

The evening concluded with an emotional meeting with the filmmaking team behind Parking. Mihai Smarandache, the protagonist of this love story shot in Spain, writer Marin Mălaicu-Hondrari whose bestselling novel inspired the screenplay, composer Julio de la Rosa joined director Tudor Giurgiu in thanking cinephiles who filled several theaters to the brim for their warm welcome to Cluj. From June 14, Parking will be distributed in cinemas in Romania by  Transilvania Film.

Two very full days are coming up: Saturday, June 1st, the spectacular grounds of the Bánffy Castle in Bonțida will become first a paradise for children during the day, then, starting at 9:30 PM, a setting for the CoinCoin & The Extra-Humans, and, finally, a dance floor for the Full Moon Party guests.

The weekend culminates with awarding Nicolas Cage with the Transilvania Trophy for Contribution to World Cinema and the event screening of  his film Face/Off at 9 PM in the Unirii Square Open Air cinema. Then on Sunday, June 2, at 12:00 at Hotel Platinia, cinephiles can find out more details in the Nicholas Cage masterclass, and the same day at 9:30 PM his horror film Mandy will be screened at the Banffy in Bonțida.

Even if the forecast is optimistic, organizers recommend checking for location and scheduling changes for open air events. The official TIFF app, available on the Apple App Store and on Google Play, gives real-time notification of scheduling changes, as do the TIFF social media channels.