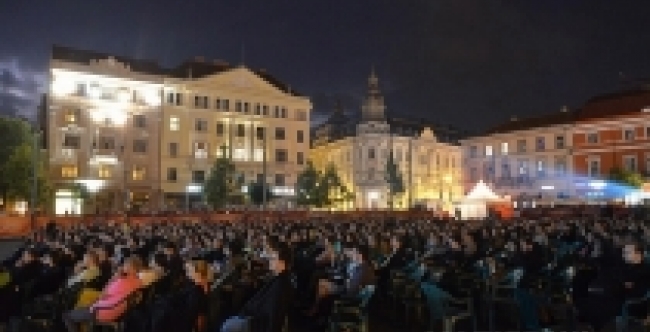 After ten days of festival, Transilvania IFF reached the end of its 11th edition. Thanks to the newly established location, Casa TIFF, the cultural events will carry on throughout the year until our next meeting in 2013.

Summing up this year’s experience, we can only say one thing: Transilvania IFF is still growing! 241 films from 46 countries were shown in Cluj, with 21 more than in 2011, that is. The 400 screenings and special events attracted over 67.000 spectators, with 10% more than the previous edition.

The smooth running of all screenings, concerts, exhibitions, special events, cultural projects was handled by the 300 staff members and 493 volunteers, with 88 more than the last year. From the youngest (age 16) to the eldest, Greg Smith, an American volunteer from San Francisco, age 63, people responded positively to TIFF’s campaign in the European Year for Active Aging and Solidarity between Generations.

The new Transilvania IFF website attracted 45.000 unique visitors from 93 countries during the 10 days of the festival. The mobile version m.tiff.ro generated 5000 accesses. Overall, www.tiff.ro, with daily updates, photos and videos peaked a record number of 92.891 hits from June 1st till June 10th, while the festival’s page on Facebook received 7000 new fans, for a total of 24.000.

Moreover, Transilvania IFF is proud that its Special Guests were impressed by the quality of films and by the enthusiasm of the audience. „This festival is really mishto!”, said  Geraldine Chaplin on the stage of the National Theatre, where she was honored with the Lifetime Achievement Award.

Academy Award winner, actress Melissa Leo made a surprise visit to Cluj and held a masterclass within the framework of Transilvania Talent Lab. She declared herself overwhelmed by the energy she found at Transilvania IFF.

Dieter Kosslick, Director of Berlinale, came to Cluj for the first time. “It was always clear that I should come to Cluj some time, but it had only been due to organizational reasons that it hadn't worked out before. My first impressions were that it reminded me of Sarajevo as it was a few years ago - where you really feel that such an enthusiasm has been triggered in the town with the people on the streets and in the cinemas. You really see that things are vibrating and I hope that this feeling will be preserved because these are the festivals of the future.”, said the Berlinale Director.

Well-know Thai Director Pen-Ek Ratanaruang starred in a masterclass and presented his latest feature film Headshot. He summed-up his experience saying:”I think the public is great. I think they truly appreciate various types of films. I realized it when I heard the questions they asked. They seem to know what is going on.”

Robert Olla, Executive Director at Eurimages, told us: “Essentially, TIFF has the reputation amongst industry insiders for being an invaluable festival both in terms of good programming and for its friendly atmosphere; an essential mix for optimizing exchanges amongst professionals.“