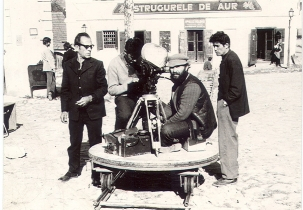 The last three days of Transilvania IFF 11th edition will be filled with special screenings, along with the last-chance screenings of the films in the official competition and from the Romanian Days section.

Transilvania IFF announces yet another surprise for the 11th edition, the World Premiere of Noseland. The mockumentary directed by Aleksey Igudesman and Sebastian Leitner will show classical music in a way never quite seen before. The screening took place at Friday, June 8, in the presence of directors Aleksey Igudesman and Sebastian Leitner, and producer Sabina Hasanova. Funny and emotional, Noseland is a humorous ode to the world of classical music and some of its star musicians.

Considered one of the films clés of Romanian Cinema, Stone Wedding directed by Mircea Veroiu and Dan Pița will be celebrated at its 40th anniversary at Transilvania IFF 2012 with a special screening in the presence of director Dan Pița, cinematographer Iosif Demian, art director Helmut Stürmer and actors Ursula Woltz and  Mircea Diaconu.

The event will take place Friday, June 8 and will be completed with the screening of The Memory of Stone, a documentary by Iosif Demian, that describes a emotional journey made 40 years after, in the places where the principal photography for the film took place.

Transilvania IFF official closing screening is the comedy Starbuck by Ken Scott, about a 42 year old adolescent who discovers he's the father of 533 children. The screening takes place in the same venue where the 11th edition of the festival opened, on June 1.