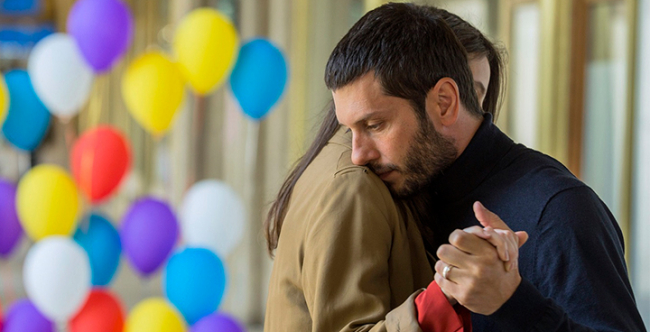 Dedicated to first- or second-time feature film directors, the Official Competition of the 2019 Transilvania International Film Festival includes 12 unique, strong, and provocative works from among which the official jury will select the winner of the Transilvania Trophy. “All if fair in love and cinema” emerges as the theme for this year’s selection, which focuses on human relations and on our all-too-often desperate need for love and belonging.

“This year I was interested primarily in films that do not hang their hat on the social or political context of the moment, either completely ignoring it or subtly inserting it into intimate stories boldly pushed beyond all consequence,” says TIFF Artistic Director Mihai Chirilov.

Two films in competition are award recipients from prior editions of the Transilvania Pitch Stop co-production platform. First, Marius Olteanu’s feature film debut Monsters., which is also the only Romanian title in competition for the Transilvania Trophy, tells a love story marked by compromise, social pressures, and painful revelations with admirable formal rigor. Monsters. premiered in the Berlinale Forum this year and went on to win the Sofia International Film Festival.

Then, another Transilvania Pitch Stop discovery,  The Man Who Surprised Everyone is the second feature from Russian duo Natasha Merkulova and Aleksei Chupo. Actor Natalya Kudryashowa was recognized for her role in Venice, where the film played in the Orizzonti section. Combining Russian folklore elements with LGBT issues, the story centers on a Siberian forest ranger who finds out he has only two months to live and resorts to radical schemes to cheat death.

A second Russian film will have its international premiere at TIFF is The Humorist, Mihail Idov’s debut which follows a week in the life of Boris Arkadiev, a stand-up comedian in 1980s Soviet Union who is equally tortured by censorship and his own insecurities. The protagonist’s outsized fame, doubled by a lack of personal freedom, awakens his desire for revenge in an anthological scene with an unexpected ending. Revenge also propels the second feature from Icelandic director Hlynur Palmason, designated best director at TIFF 2018 for his Winter Brothers. Freshly selected for the Semaine de la critique in Cannes, A White, White Day revolves around a taciturn policeman obsessed with his wife’s possible infidelity two yeas after her death.  Revenge again, but also the woman’s place in a traditional society are at the center of Pause, the black humor-speckled debut from Cypriot director, writer, and producer Tonia Mishiali: a woman trapped in an oppressive, loveless marriage takes refuge into an imaginary life dominated by vindictive violence — until reality and fantasy collide.

Nora Fingscheidt’s Berlinale selection System Crasher is the visceral and devastating story of a nine-year-old girl fighting for her mother’s love and her place in the family — and of the desperate attempts of the social assistance system to save the young protagonist from herself when her mother abandons her to protect her other children. Also from the Berlinale, the Forum section this time, comes Belonging, a personal story from the life of young Turkish director Burak Çevik. Perhaps the least stylistically conventional selection for the competition, this poetic contemporary thriller is the reconstruction of moment the director’s grandmother was killed by his aunt and her love 15 years before, doubled in a cryptic puzzle by a love story.

Love beyond social norms is the theme of Barnaby Southcombe’s Scarborough, in which two intergenerational couples live their parallel forbidden love stories far away from prying eyes, in a small British coastal town suspended in time. The sophisticated rom-com Un homme fidele is also about a very complicated love story. French film star Louis Garrel’s second directorial effort was recognized as Best Screenplay in San Sebastian in 20018 and will be distributed in Romania by Independența Film. Louis Garrel himself alongside his famous wife Laetitia Casta play a couple who split up for one of their best friends only to reunite in the aftermath of the friend’s death. Lily-Rose Depp, Johnny Depp and Vanessa Paradis’s talented daughter, also plays in the film. Another complex love story, this time told in a sci-fi register, comes from Cesar and José Esteban Alenda: Not The End has at its center a time traveler seeking to repair a tragic mistake from the past. Reminiscent of TIFF winner Stockholm, this intimate drama with only two characters was nominated at the Goya Awards this year.

“Sometimes what happens and what must never happen are the same thing,” Anne tells her stepson, a teenager she just seduced in a compulsive move that threatens her entire life. Danish actress Trine Dyrholm, now on her second collaboration with director May el-Toukhy, takes on the role of a successful lawyer with an ostensibly happy family in the controversial Queen of Hearts, which received the Audience Award at Sundance and will be distributed in Romania by Transilvania Film. Another Sundance-winning title, Special Jury Prize winner Monos, Alejandro Landes’s second fiction feature is the only one who plunges us into the turmoil of our times, without being very explicit: a dynamite mix of Apocalypse Now and Lord of the Flies, this tribal fable of survival, power, and anarchy among a group of warring children could just as easily take place any place, any time.

Among the first names confirmed for the official jury of the 2018 TIFF competition are: Canadian director, producer, and critic Denis Côté, who came to TIFF twice, once with Berlinale 2013 Alfred Bauer prize-winner Vic + Flo Saw a Bear and again with his most recent documentary A Skin So Soft. Côté received three important prizes at Locarno: the Golden Leopard in 2005 for Drifting States, the Silver Leopard in 2008 for All That She Wants, and Best Director in 2010 for Curling. With over 30 years of experience in the film industry, Mike Goodridge is the former executive of Protagonist Pictures (responsible, among others, for The Lobster and God’s Own Country), the current Artisitic Director of the Macao International Movie Festival, and the producer of 2016 Cannes Jury Prize American Honey. Director-writer Constantin Popescu started off as a production and directing assistant for important figures like Lucian Pintilie (The Oak, 1992; An Unforgettable Summer, 1994; The Afternoon of a Torturer, 2001), Costa Gavras (Amen, 2001), and Francis Ford Coppola (Youth without Youth, 2007). Following a series of award-winning shorts, Popescu made his feature debut at the 2010 Berlinale with Portrait of the Fighter as a Young Man, followed by Principles of Life (San Sebastian 2010), and his biggest success, Pororoca, which won the Romanian Days Award at TIFF 2018, a Gopo award for direction in 2019, and a Best Actor award  for lead Bogdan Dumitrache in San Sebastian.