TIFF Cinematheque at its second edition 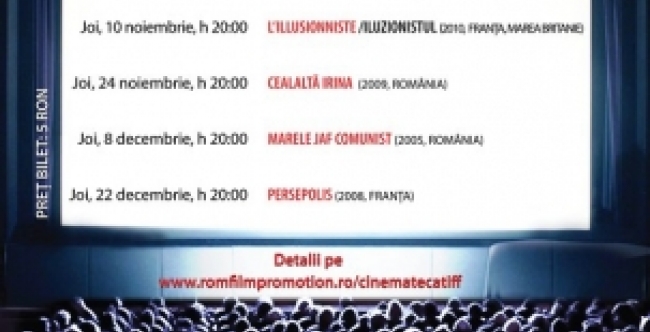 Romanian Film Promotion continues the campaign of regaining the Romanian audiences after finalizing two important projects: TIFF Operation Kino (which took place in 13 cities in Romania, gathering approximately 25.000 viewers) and the White Night of Romanian Films (which took place in the same day in Bucharest, Cluj-Napoca, Iaşi and Timişoara, with more than 7500 participants).

After the success of its first edition, in 2010, Romanian Film Promotion brings back TIFF Cinematheque between 27th October and 22nd December in Cluj-Napoca and Sibiu.

Every Thursday night, Victoria Cinema in Cluj-Napoca will host some of the most representatives films screened in the 2011 edition of Transilvania International Film Festival (TIFF). Interesting documentaries, overwhelming dramas as well as fascinating comedies are part of the Cinematheque program, aiming to gather a representative audience.

In Sibiu, on the other hand, film fans will enjoy the cinema surprises prepared by TIFF team. Beginning with 27th October, every two weeks, on Thursday evening in Humanitas Bookstore they will be able to watch films that were screened in the past years at TIFF.