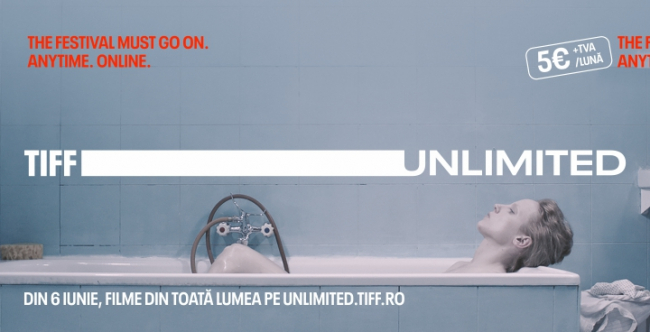 At the 18th edition, Transilvania International Film Festival launches the first streaming platform which brings the festival exoperience online: TIFF Unlimited – a product unique both for Romania and for the film festivals in Central and Eastern Europe.
TIFF Unlimited, a wide-ranging project from a range of projects proposed annually meant to promote Romanian and international cinema, is a streaming platform (VoD) which allows subscibers access to films from the festival selection and to auteur, independent and award winning films, unavailable on other channels. Starting with June 6, on unlimited.tiff.ro, movie lovers will be able to stream films from the 2019 festival selection, film selections from previous festival editions and award-winning films from the portfolio of Romanian film distribution companies.

„The festival must go on. Anytime. Online” is the TIFF Unlimited message, which emphasises the level of responsability taken by the organisers in their promise to bring the TIFF films closer to as many people as possible, giving them access, anytime and anywhere in Romaniua, to films from all over the world, on multiple devices.

„It has been our wish for a while to continue the TIFF experience in the online environment, as our public has always been keen on rewatching films from the festival or to see the films they missed, and TIFF Unlimited is the vehicle which will bring to all movie lovers, even if they did not make it to TIFF, their own movie festival in their living room.”, said Tudor Giurgiu, the president of the Transilvania International Film Festival.

„TIFF Unlimited brings to the public award-winning feature films from the biggest film festivals, foreign and domestic films liked by the public and the juries, brave films, radical or controversial from different genres and socio-political contexts, but also intimate and special stories like the ones from this year’s competition. The streaming platform will include new films every month so that the festival experience continues, in fact, throughout the year.”, said Mihai Chirilov, TIFF artistic director.

TIFF Unlimited, the first streaming service (SVoD) launched by a film festival in Romania and the only product of its kind in Central and Eastern Europe, is a project developed with the help of PitechPlus, software supplier.

„We have contributed to the development of TIFF Unlimited because we are fans of TIFF and we wanted to be part of a project which gives movie lovers to see films which they cannot see in cinemas, available anytime, anywhere. Our expertise in the field of video streaming development has allowed us to choose the best technological solution for the TIFF Unlimited platform. We will continue to be technical partners to the evolution of the project with the scope of building a platform to accompany TIFF with new technologies.”, said Bogdan Herea founder of PitechPlus

TIFF Unlimited is a project supported by the National Cinematography Center and the Administration of the National Cultural Fund.