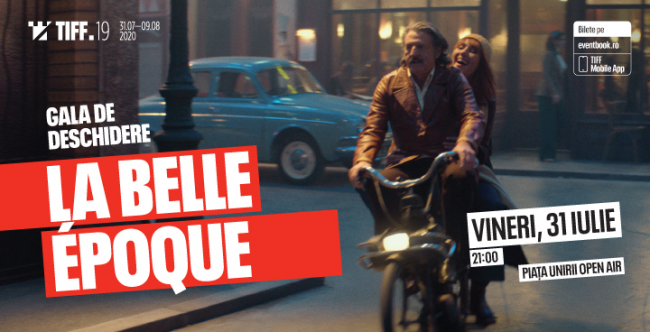 A nostalgic, humor-filled journey in time opens the 19th edition of the Transilvania International Film Festival on July 31st, 2020, as La Belle Époque, featuring Daniel Auteuil and Fanny Ardant, screens on the opening night.  Until August 9th, the most anticipated films of the year, coming straight from the major festivals or the Oscars line-up, will stand alongside controversial titles, delightful comedies, or stories lifted from real life, each night in the Unirii Square Open Air cinema. The closing night will also feature time and history, though this time of a personal variety, in Benoît Delépine and Gustave Kervern’s Delete History, a screwball comedy in which older characters confront the technology which undermines their lives.

If you could travel in time, where would you go? The protagonist of La Belle Époque, played by French star Daniel Auteuil, choses to relive the day he met his wife, played by the charming Fanny Ardant. A recipient of the Transilvania Lifetime Achievement award in 2018, the famous French actress received a César this year for her role in Nicolas Bedos’s comedy. La Belle Époque premiered in Cannes and, in the words of the first Variety review, works to “remind how and why we fall in love in the first place.”

Tickets for the opening night of TIFF 2020 are on sale at tiff.eventbook.ro in numbers limited by the public health conditions imposed by authorities for open air events.

Another French comedy, this time coming from Berlin, where it was awarded a Silver Bear, will close Transilvania IFF 2020 in the same Unirii Square Open Air cinema on Sunday, August 9: Effacer l’historique / Delete History, signed by Benoît Delépine and Gustave Kervern, who are already known and much loved by TIFF audiences for Aaltra. Three victims of the internet declare war on tech giants in a delightful comedy about small-town daily life upended by technology and a senior citizens’ crusade to free the world from a digital dictatorship.

Extraordinary films will turn the Unirii Square in Cluj-Napoca into a cinematic feast throughout early August: Federico Fellini’s La Dolce Vita is not to be missed. Then there is Jan Komasa’s Corpus Christi, Poland’s proposal for the Oscars, and Military Wives, a comedy featuring Kristin Scott Thomas and directed by Peter Cattaneo, who is also responsible for The Full Monty. Régis Roinsard’s Les Traducteurs / The Translators is a thriller revolving around hackers and literature translators, features Lambert Wilson, Olga Kurylenko, and Riccardo Scamarcio. Finally, there will be Bong Joon Ho’s Oscar - and Palme d’Or-winning Parasite, which needs no introduction.