The Transilvania Trophy goes to Argentina 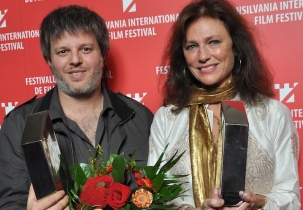 The tenth edition of Transilvania International Film Festival announced its winners, during the Closing Gala which took place on Saturday evening, June 11, at The National Theatre in Cluj-Napoca. A ceremony filled with surprises and touching moments, both for winners and for the more than 1,000 present guests and audience.

A special and charming moment set the Gala going. The President of the festival, Tudor Giurgiu, invited three guests on stage: the delegate of Berlin Film Festival for Central and Eastern Europe - Nikolaj Nikitin, the director of Warsaw Film Festival - Stefan Laudyn and the director of Sofia Film Festival, Stefan Kitanov, in order to reenact for the public the evening when the idea of an international film festival was being born, in the Varna Restaurant in Warsaw. Czech Stefan Uhrik, the fifth man present at the now famous meeting, got through the hall in Cluj by phone.

The happiest man of the evening was, undoubtedly, Argentinian filmmaker Miguel Cohan. This year, The Transilvania Trophy goes to Argentina. The jury, made up of Laurence Herszberg, Cedomir Kolar, Uberto Pasolini, Radu Muntean, and Vesela Kazakova, decided that the 15,000 Euro award, offered by The Romanian Cultural Institute, should go to No Return (dir. Miguel Cohan). The fifth members considered the debut feature of Miguel Cohan as the most accomplished film in the competition line-up, a discourse on ethics disguised as a high-quality detective story, which was shortlisted by the jury for almost every possible trophy. Corina Şuteu – director of the Romanian Cultural Institute in New York and the special guest of the tenth edition of the festival, actress Jacqueline Bisset, presented the Argentinian filmmaker with the most coveted trophy of the evening, after, only shortly before, he had received from jury member Radu Muntean, together with scriptwriter Ana Cohan, the Best Screenplay Award for the profoundly human dimension of its characters and the way in which the storytelling deftly succeeds in keeping the overall thriller-like tension, without falling in the dramaturgic traps of a film of this genre.

The jury decided to present the Best Directing Award, offered by the National Film Centre, ex-aequo, to Constantin Popescu, for Principles of Life, and Rúnar Rúnarsson, for Volcano. Even if they directed two entirely different films, the two filmmakers exhibited precision in the way in which they directed their actors and an extremely inspired use of cinematographic language, was the motivation of the jury. The announcement elicited a burst of applause and stirring emotions for both winners.

The main surprise moment came when producer Uberto Pasolini, member of the Competition Jury, and Cornelia Popa presented the Best Cinematography Award, offered by Kodak Cinelabs Romania: Pasolini went on stage wearing the official football outfit of the tenth edition, cheered by the entire audience. The award went to Linda Wassberg, for the cinematography of She-Monkeys.

For an uncompromising, right and credible performance, the jury decided that this year the Best Performance Award, offered by Vitrina Advertising and presented by actresses Vesela Kazakova (Bulgaria) and Maria Dinulescu (Romania) went to Elodie Bouchez, for The Imperialists Are Still Alive!

The Special Jury Prize, offered by Vodafone, went to A Useful Life (dir. Federico Veiroj), a charming film, an elevated and meaningful homage paid to cinema.

The Serbian feature Tilva Roš, by Nikola Ležaić, was overwhelmingly liked by film critics, winning the FIPRESCI Award because of its honest depiction of wasted youth. The jury added: without as much of telling a story, the movie is a slice of life which has universal appeal and it's done with so much innocence that it has really conquered our hearts.

A series of memorable moments took place during the Closing Gala of the anniversary edition of TIFF.

Marin Karmitz, legendary French producer born in Romania, founder of the production, distribution and exhibition company MK2 and producer Oleg Mutu were the recipients of the Special Award of the 10th Transilvania IFF.

The festival also paid homage to Lucian Pintilie, one of the forerunners of Romanian cinema, through a complete retrospective, but also through an Excellency Award offered by Mercedes-Benz and presented by film director Corneliu Porumboiu and Mihai Chirilov, the festival’s Artistic Director.

Jacqueline Bisset, the guest of honor of the tenth edition, came on stage both to offer the Transilvania Trophy and to receive the Special TIFF 2011 Award For The Contribution To The World Cinema.

British actor Michael York, recipient of the Lifetime Achievement Award Offered To An Outstanding Personality Of The European Cinema, thanked the organizers for this honor. Through a video recording, he expressed his regret for not being able to attend the event in Cluj, due to health reasons.

TIFF 2011 ends on Sunday, June 12. The screening that officially marks the end of the tenth edition is Life in a day (r. Kevin Macdonald).