10.06.2012 01:14
On Saturday, June 9th, a hot summer day in Cluj ended with an even hotter evening ceremony for the closing of the 11th edition of Transilvania IFF 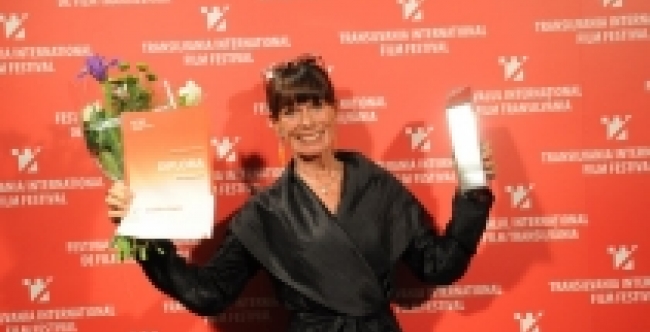 On Saturday, June 9th, a hot summer day in Cluj ended with an even hotter evening ceremony for the closing of the 11th edition of Transilvania IFF. For Norwegian director Joachim Trier things looked good right from the start.

After winning together with co-writter Eskil Vogt the Best Screenplay Award, Joachim Trier was rewarded with the Transilvania Trophy for his second feature, Oslo, August 31st. The award, in ammount of 15.000 Euro, was received on his behalf by Laurențiu Merișan (Independența Film), from actress Geraldine Chaplin and Horia-Roman Patapievici, director of Romanian Cultural Institute (ICR).

In its annual recognition of talents from International Cinema, Transilvania IFF offered the Lifetime Achievement Award to: actor Ion Caramitru, actresses Geraldine Chaplin, Mari Törőcsik and director Claude Lelouch, who received his honorary award on June 6. „This festival is really mishto!”, summed up Geraldine Chaplin her experience at Transilvania IFF, where, in her own words, was spoiled like a child.

Two surprise awards rewarded two impressive carreers in cinema. During the Closing Gala, art director Helmut Stürmer and director and cinematographer Iosif Demian were honored with The Excellency Award. They both were part of Stone Wedding, the Romanian classic directed by Dan Pița and celebrated at 40 years from its premiere.

The Best Directing Award went to Maja Miloš for directing the film Klip.  Sergei Loban won Special Jury Award and The Audience Award for his interconnected stories from Chapiteau Show. Best Cinematography Award went to Bárbara Álvarez for the cinematography of Thursday Till Sunday (Chile-Netherlands, 2012) and it was director Dominga Sotomayor Castillo who received the award on her behalf.

Constantin Cojocaru and Victoria Cociaş received from Corina Șuteu, director of the Romanian Cultural Institute in NY and film critic Michel Ciment a Special Mention for the roles in Three Days Till Christmas (Last Days in the Life of Elena and Nicolae Ceauşescu by Radu Gabrea. Constantin Cojocaru confessed that playing the role of Ceauşescu made him feel like a debutant.

Surrounded by a cold blue light, Joachim Luetke, the well-known graphic horror designer, went on stage to offer the Award for the Best Film in the Shadows Shorts competition to Hope, directed by Pedro Pires.