Ukrainian band DakhaBrakha returns to TIFF for an extraordinary concert 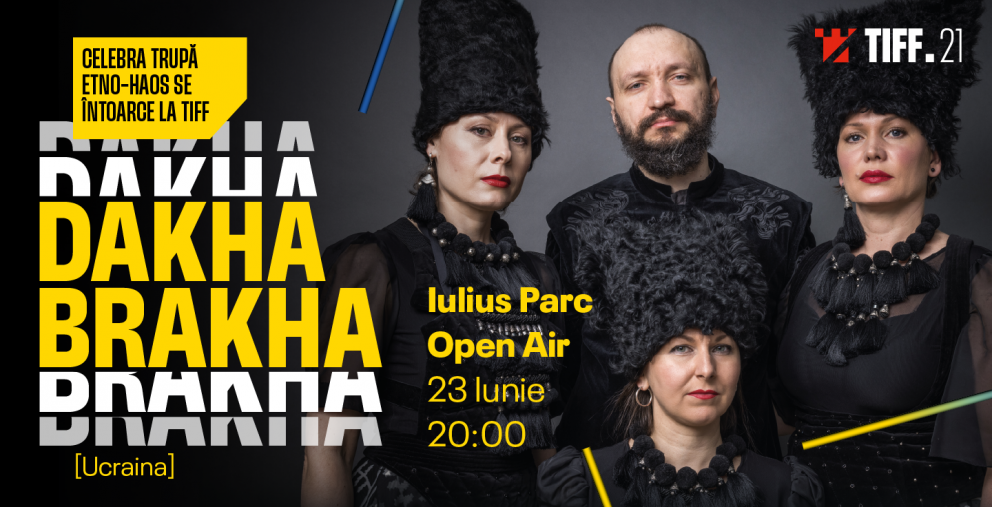 One of Ukraine's best-known and most appreciated bands, DakhaBrakha (in old Ukrainian "give/take"), returns to the Transilvania International Film Festival (17 - 26 June 2022) for an extraordinary concert, part of the TIFF For Ukraine initiative. Founded in 2004 in Kiev by avant-garde theatre director Vladislav Troitsky, DakhaBrakha defines its style as "ethnic chaos". The essence of their music comes from Ukrainian folklore, to which jazz, trance, rhythms and instruments from cultures as diverse as Indian, Arabic and African are added. The result is a fascinating and original show that can be seen in Cluj-Napoca on June 23rd 2022 at Iulius Parc Open Air. Tickets are on sale online.

In recent months, DakhaBrakha has been on an international tour, promoting Ukrainian music and delivering messages of peace: "It was hard to leave our country, but we are here because we are artists. It's very important for us to feel support and solidarity with Ukraine, to let the world know about our music and traditions in these times of war." DakhaBrakha members are Marko Halanevych, Iryna Kovalenko, Olena Tsybulska and Nina Garenetska.

For NPR, DakhaBrakha's live shows are "absolutely brilliant". The DakhaBrakha quartet has released six albums and has also performed at The Royal Shakespeare Barbican Theatre in London for the production of "Macbeth".

In 2013, at TIFF, DakhaBrakha provided live accompaniment to a screening of Earth (1930), the masterpiece of Ukrainian director Alexander Dovzhenko (1894 - 1956). Their show was so appreciated by the audience that, the next day, DakhaBrakha played an extra concert for fans in Cluj, at Casa TIFF. The band returned to TIFF in 2018, where they electrified the audience.

This year, DakhaBrakha's concert is part of TIFF for Ukraine, a special initiative that will be dedicated to the community as well as to Ukrainian filmmakers. This includes film screenings by Ukrainian filmmakers, screenings with Ukrainian subtitles for children, a day celebrating the country's food and traditions, and a donation campaign.

The folk song Specially for You, performed by DakhaBrakha, is featured on the soundtrack of the documentary Bucolic (d. Karol Pałka, Poland) which will be screened at TIFF 2022 in the competition section What’s Up, Doc?.