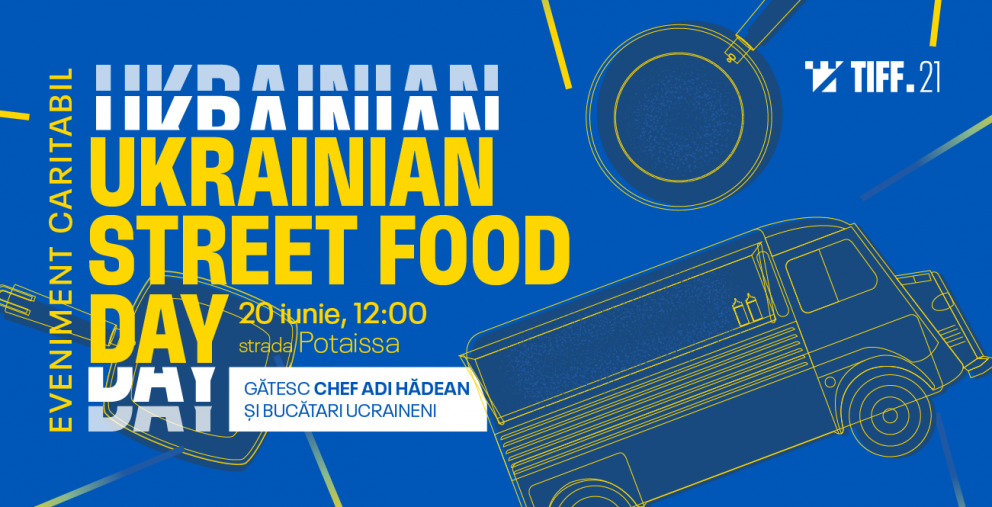 Chef Adi Hădean comes to Transilvania International Film Festival 2022 for a special day: Ukrainian Street Food Day. He will prepare, together with Ukrainian chefs, traditional dishes from the neighbouring country, which people from Cluj are invited to try on June 20 at a special event on Potaissa Street in the city centre. All funds raised from the event will be donated to the #SolidarSocial initiative which delivers hot meals to refugees.

For Ukrainian Street Food Day, TIFF and Adi Hădean are launching a call to Ukrainians in Cluj-Napoca, professional or amateur chefs, who are invited to join the event to cook traditional food together. Those interested are invited to write a message to ana.tatar@tiff.ro.

“I was very happy to receive the invitation from TIFF, because it aligns with the project we started through #SolidarSocial with the help of which we have so far donated over 100,000 hot meals to refugees at the border. I invite people from Cluj to visit us on June 20, they are in for a special culinary experience. And all the money we will collect in exchange for the dishes will be redirected to the Ukrainian community”, says Adi Hădean.

Free access to films and events for Ukrainian citizens

Ukrainian Street Food Day is part of TIFF For Ukraine, an initiative of the Festival dedicated to the film industry and the Ukrainian community. Ukrainian citizens will have free access to the festival with an ID card presented at the entrance before each event:

- for all screenings in Piața Unirii;

- for the screenings of How I Learned to Fly, a film for children and teenagers, with subtitles in Ukrainian, on Saturday 18th of June, 12:00 (Sapientia University) and Wednesday 22nd of June, 17:00 (Mărăști Cinema);

and for the following screenings:

Admission for free seats is 5 minutes before the start of each screening, on a space available basis.

The full festival programme will be available soon.