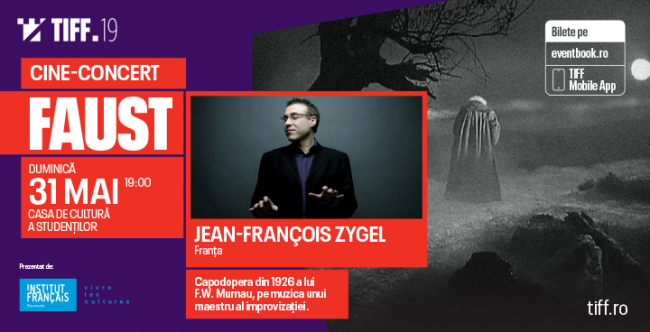 UPDATE. Transilvania IFF 2020 has been postponed for a later date, which will be announced when the global situation will allow us. The two Malombra cine-concerts, conceived in partnership with the La Rochelle Festival, have been canceled. If you bought tickets, you cand get a refund on Eventbook.ro.

Classic films get new life at the Transilvania International Film Festival (May 29 - June 7) in unique shows that experiment with fusing cinema with classical and electronic, jazz, rock, or pop music. Tickets for events already announced, as well as festival passes for TIFF’s 19th edition can already be  purchased at tiff.eventbook.ro.

One of the world’s best musicians working with silent cinema comes to Cluj-Napoca on Sunday, May 31st, at 7 PM, at the Students’ Culture House: A master of improvisation, Jean-François Zygel will accompany live F.W.Murnau’s 1926 masterpiece Faust (1926). “At TIFF I will accompany the incredible film made by the genius Murnau for the 12th time. Shadow and light, tears and lightning, a terrifying fight between good and evil, chaos and revelations, innocence and perdition — the expressive force and intensity of the imagery will overwhelm everyone, I am sure, as it has every time I accompanied this film,” said Zygel.

A singular figure among musicians, pianist and composer Zygel  founded the piano improvisations classes at the Conservatoire de Paris and has worked to popularize classical music on humor and passion-filled radio and TV shows across France. Zygel has collaborated with major figures such as Michel Portal, Ibrahim Maalouf, Bobby McFerrin, Antoine Hervé, or Sly Johnson. His most recent album, L'Alchimiste, was released by Sony. At TIFF Zygel will also conduct a masterclass on June 1st (details to be announced soon). The ciné-concert is organized in partnership with the French Institute.

At the same time, TIFF 2020 features an absolute premiere in Romania: two composers, conductors, and performers have accepted to score Carmine Gallone’s silent gothic melodrama Malombra (1917). Julie Roué (France) and Simona Strungaru (Romania) will each unveil their own version live at the Military Club in Cluj-Napoca — on two consecutive days. The event is organized in partnership with the La Rochelle Cinéma festival in France, which is famous for its ciné-concerts — and which will host a second iteration of the event. 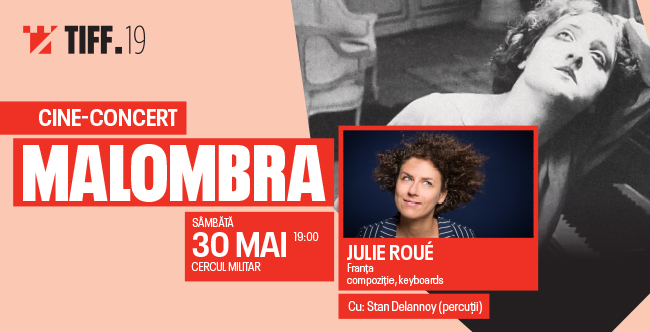 Suffused with tension and emotion, Malombra is a silent diva melodrama typical for its time — and one of the early films made by Carmine Gallone in Italy. In the gothic atmosphere of a castle, Marina di Malombra (played by Lyda Borelli, a famous figure at the time) discovers a letter from a woman who appears to have been killed by her uncle. She begins identifying with her and seeks revenge.

The film will be first shown with an experimental techno pop score on May 30th at 7 PM, at the Military Club in Cluj-Napoca, when Julie Roué will perform live, in premiere, together with percussionist Stan Delannoy. Julie Roué plays the piano and the guitar in addition to other instruments, which include a wide array of objects she comes across: shells, bottles, metal boxes, etc. She creates an experimental fusion of jazz, electronic, and world music, with strong pop influences. She has composed the original score for over 40 films, including several Cannes winners, and launched her first electro-pop album,  About Luke, last year. 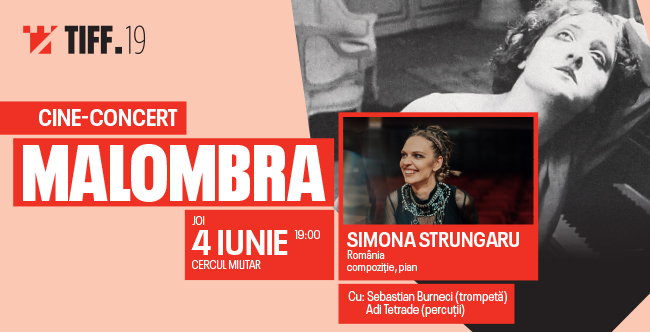 Known for her own classical, jazz, and electronic experiments, Simona Strungaru will perform her own version of the Malombra score on June 4th at 7 PM at the Military Club, together two other important Romanian musicians: Sebastian Burneci (trumpet) and Adi Tetrade (percussion). Simona Strungaru returns to TIFF after her memorable 2016 turn as the conductor of the Hungarian State Opera Orchestra accompanying the screening of Haxan at the Banffy Castle. A pianist, conductor, and composer, Simona Strungaru is a principal conductor of the Bucharest Jazz Orchestra and of Sonomania. She has composed a symphonic suites, live electronic and live street art, as well as soundtracks for animations and musicals. She has collaborated with major bands (Urma, Cobzality), artists (American trumpetist Alex Sipiagin), and orchestras, and last year she launched the project  Firestarter by DIOSA (her horror film-inspired alter ego) by rendering Prodigy tracks for the orchestra at the Awake festival.

TIFF festival passes are now on sale! TIFF X-Card, SuperCard and Iron Card holders can get advance tickets to any film or special event in the program with 48 hour notice, as well as access to a number of special screenings and events. Passes can be purchased from tiff.eventbook.ro and, soon, on the TIFF 2020 official app.

For TIFF films anytime and anywhere in Romania, go to TIFF Unlimited  unlimited.tiff.ro.